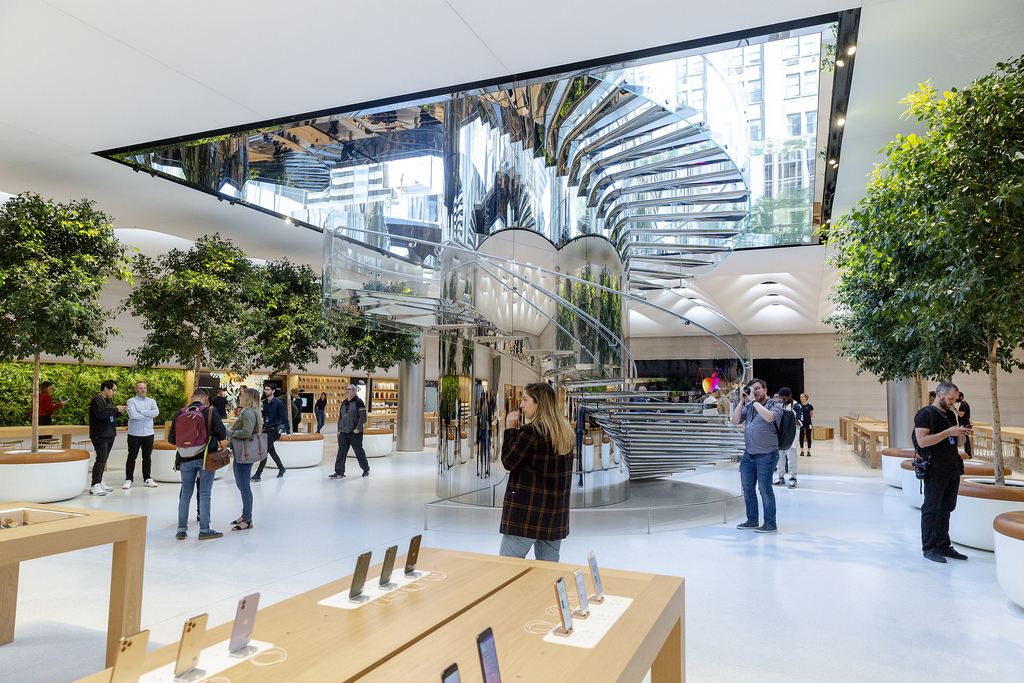 Apple's Fifth Ave. reopening is timed to coincide with the launch of several new products.

Apple Inc. has been renovating its iconic store on Manhattan’s Fifth Avenue for almost three years, and when it opens to the public on Friday customers will likely notice new aesthetics, including 20-foot trees, plant walls and skylights that bring daylight into the subterranean space. But the most popular change may well be two new entrances, subtly placed on the north and south side of the store across the street from the Plaza Hotel.

Easing egress is a tacit nod to complaints that Apple’s stores had become hard to shop because they’re busy and difficult to navigate, thanks to the competing needs of shoppers looking to hang out, get their gadgets fixed or actually buy something. Now locals and mission shoppers can come and go without having to deal with throngs of tourists flowing through the glass cube entrance that made the store a retail landmark and one of Apple’s busiest.

The company more than doubled the size of the service area, what it calls the Genius Bar. That addresses another critique—that getting help in an Apple store can take a long time. The renovation also almost doubled the size of the space, adding rooms where customers can test out products such as the HomePod smart speaker and small businesses can get advice on how best to kit out their offices.

The Fifth Avenue location’s reopening was timed to coincide with the launch of several new products, including the iPhone 11 and Apple Watch Series 5 that debut on Friday.

Earlier this year, veteran Apple executive Deirdre O’Brien replaced Angela Ahrendts as retail chief. Ahrendts, who previously ran Burberry, brought a luxury world perspective to Apple and was criticized for turning the stores into branding exercises rather than places to shop and get service. O’Brien, who also runs human resources, worked on the team that opened the first Apple store in 2001.

“Deirdre has a deep understanding of the stores,” a former Apple executive told Bloomberg earlier this year. “She’s just never been the face of them.”