Apple’s holiday commercial may leave you weeping over an iPad: Tuesday Wake-Up Call

Plus news about the Super Bowl, Amazon and Netflix 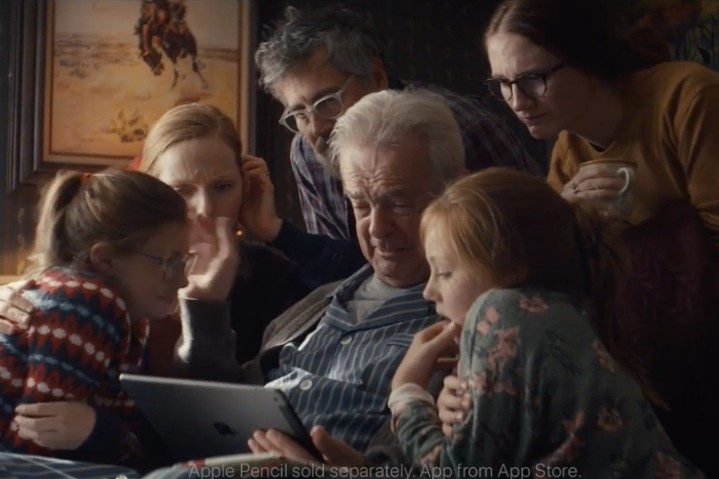 Happy holidays from Apple
Apple’s new holiday commercial is about a family getting together at Grandpa’s house to comfort each other after a loss. It’s a lovely tale from TBWA/Media Arts Lab and Smuggler’s Mark Molloy, capped off with an emotional plot twist. (And yes, it might make you cry. If the plot doesn’t get you, the music from the Pixar movie “Up” might do it.)

Of course, it’s also an ad, and one that “delivers a strong product message,” as Ad Age’s Alexandra Jardine writes. In essence, the idea is that we shouldn’t feel guilty handing our kids an iPad when we need them out of our hair, because Apple products cultivate children’s creativity. The young girls in Apple’s commercial seem to be iPad addicts, but it turns out they’re actually using the gadget to craft a touching film about their family.

We’ve seen a similar spot from Apple before. Remember Apple’s 2013 holiday ad about a teenage boy who spends the holidays glued to his iPhone, though it turns out he’s actually making—you guessed it—a touching film about his family? Once again, Apple is making us get all weepy while simultaneously convincing us that screen time is actually great for our kids. Which is quite a marketing feat. Anyway, happy holidays.

Sold out
Fox says it has sold out of all remaining slots for commercials during the Feb. 2 Super Bowl. Ad Age’s Anthony Crupi writes:

“Not a single commercial unit is being held back for the stragglers who may have been iffy on their creative or were simply hoping to hold out for a better price. The early bird has a belly full of worm meat. Better luck next year.”

Also: Porsche will run the first Super Bowl ad in its history. Read more by E.J. Schultz in Ad Age. And for future reference, you can find all of Ad Age’s Super Bowl ad coverage at this link.

Google drama
Google “fired four employees who had been active in labor organizing,” The New York Times writes. According to The Times, an internal Google memo accused them of violating company policy on data security. Google organizers, meanwhile, say that's just a pretext for retaliating against organizers. The Times writes:

The dismissals are expected to exacerbate rocky relations between Google’s management and a vocal contingent of workers who have protested the company’s handling of sexual harassment, its treatment of contract employees, and its work with the Defense Department, federal border agencies and the Chinese government.

On social media, some people have dubbed the four organizers the Thanksgiving Four.

Just briefly:
Allbirds vs. Amazon: Allbirds, the shoe brand, is calling out Amazon.com "for copying a pair of its $95 sneakers made from fine merino wool and selling them for one-third the price,” Bloomberg News reports, with contributions from Ad Age.

Merger alert: Charles Schwab is set to buy TD Ameritrade for about $26 billion; Bloomberg News calls it "a deal that will reshape the retail brokerage business."

At the movies: “Netflix has signed a lease to keep New York City’s iconic Paris Theater open, and will use the space to play some of its most prestigious films,” The Verge reports.

Take 2: “Facebook is once again offering a market research app, but this one appears to avoid some of the privacy concerns from before,” Engadget reports.

Ad of the day: When a British Columbia newspaper published an ad for a local Christmas parade, a typo crept into the copy. The ad in the Comox Valley Record offered “pictures with Satan” as one of the event’s attractions. (The New York Post dubbed it “the typo from hell.”) The error got plenty of attention, and the paper apologized. But hopefully turnout will be good?