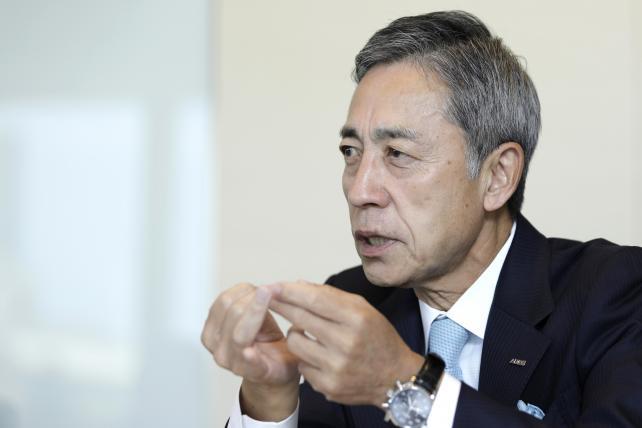 Shinichi Ueno, president and CEO of Asatsu-DK, speaks during an interview in Tokyo on Oct. 18, 2017.
Credit: Kiyoshi Ota/Bloomberg

Bain Capital has acquired 87 percent of Japan's third-largest ad agency, Asatsu-DK, through a tender offer, successfully wrapping up a takeover effort that initially had opposition from WPP, a longtime shareholder in the Japanese agency.

Shareholders agreed to sell 87.05 percent of ADK to Bain Capital Private Equity, Bain and ADK said in a joint statement. Bain wants to take the company private and delist it from the Tokyo Stock Exchange, and it will work with ADK to invest in the expansion of the agency's businesses in digital, data and content. ADK's content business includes animation, including work on a popular cartoon character called Doraemon -- a robot cat who time-travels.

Chris Beaumont, managing partner of Results International for North Asia, says Bain has had success at creating new value in its Japanese investments. And he adds that "anime is becoming more international, and there is an obvious upside in making the robotic cat, Doraemon, more popular." He sees that move as a "sensible evolution beyond traditional advertising, for ADK, to create new value. For themselves and their clients."

Focusing on digital is probably a quicker win, Beaumont says, though later on there could be an opportunity to develop ADK's Asia network for Japanese clients, especially if the Japan market faces more pressure after the country hosts the 2020 Summer Olympics.

The end of a spat

The deal brings closure to a saga that had involved WPP, the world's biggest agency company by revenue. WPP was the largest shareholder of ADK, owning about a quarter of the company, and initially it argued the Japanese agency was worth more than Bain's offer, which valued it around $1.3 billion. Other shareholders, Silchester International and Oasis Management, reportedly also had said Bain's offer was too low.

The dispute got nasty at points, with WPP suggesting that ADK had been a poor partner and complaining that it had made "disastrous" investments. WPP also took legal action in Japan to try to prevent ADK from moving forward with Bain.

Several weeks ago, though, WPP changed its mind and agreed on a way forward with Bain. The private equity firm said WPP would drop its legal action in Japan if the tender offer succeeded, and it left open the possibility of WPP taking a minority investment in ADK later on.

A statement from Bain and ADK said 36.23 million shares were purchased for 3,660 yen each, totaling around US$1.18 billion. The next step is to take the company private. Shinichi Ueno, President and Group CEO at ADK, said in a statement that "we have long believed that ADK needed the financial and strategic flexibility that can only be achieved through becoming a private business."

ADK is Japan's third-largest agency company, after Dentsu Inc. and Hakuhodo DY Holdings. Last year it ranked at No. 22 on Ad Age's list of the world's biggest agency companies by revenue. It has won awards for clients including Toyota and Unilever, and it has offices in many Asian cities, as well as in New York, Amsterdam and Frankfurt.