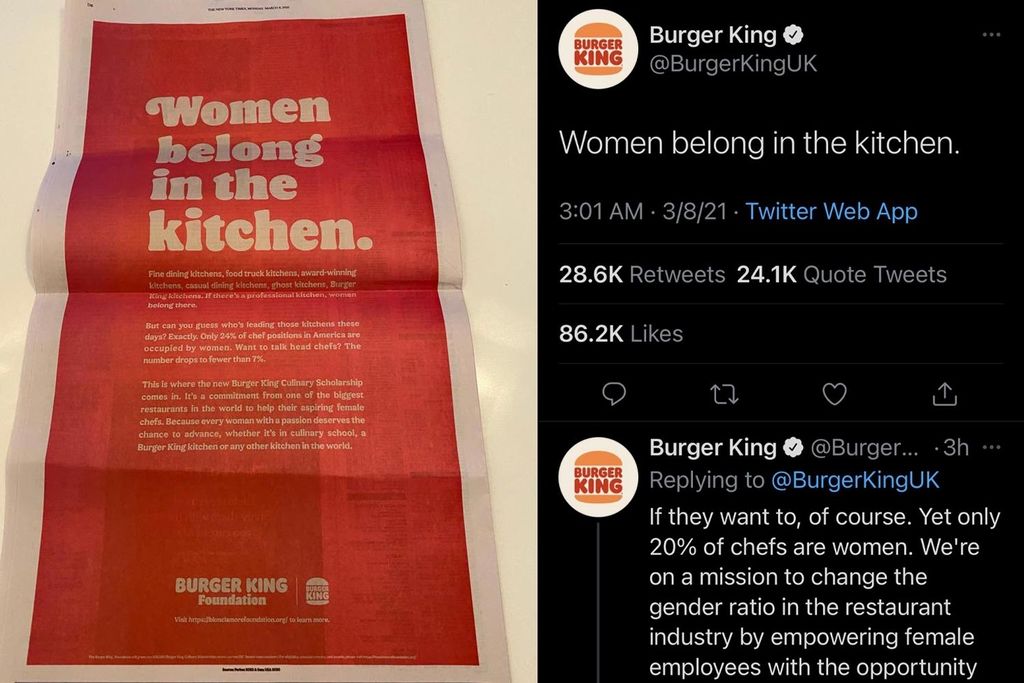 Burger King’s latest attempt at cheeky, irreverent humor backfired when a tweet on International Women’s Day leaned too far into everyday sexism. The now-deleted provocative line “Women belong in the kitchen” was meant to spark a conversation about professional chefs, not a firestorm.

“Reactions on social media showed that many people were disappointed by the brand's choice of language,” write Ad Age’s Ilyse Liffreing and Jessica Wohl. It “shows the risk of getting too playful with social media marketing, especially when many viewers see messages in isolation, and not as part of a broader campaign. Burger King saw more than 251,000 mentions before 12:30 pm EST, nearly as many as the 323,000 mentions it has seen in the past two weeks with sentiment skewing towards negative.” And on Monday evening, the brand deleted the offending tweet altogether.

It's not the first time a BK campaign has raised hackles, like a showcase last year of shuttered restaurants and intrusive sponsorships of Twitch streamers. Like those brief scandals, this one will blow over quickly, but perhaps we can all focus on the takeaway: Don’t joke about discriminatory practices. They’re too real for too many people.

Up close and personal

The Centers for Disease Control and Prevention released new coronavirus safety guidelines that said people who have been fully vaccinated (two weeks after receiving the Johnson & Johnson shot or the second dose of Pfizer or Moderna) may gather with other vaccinated people indoors without masks. They may also visit low-risk unvaccinated people from one household indoors.

While some businesses, including airlines, are already pushing back, many Americans will take this as license to return to their normal lives—shopping, dining out, dating, getting back to work. But given the unequal distribution of vaccinations, it will likely exacerbate the divide between those who have been able to get shots (which varies nearly block by block across the country) and those stuck on waiting lists.

But with just 10% of the country vaccinated so far, the prospect of eased restrictions might lure the previously recalcitrant to get their shots.

Even those who are eligible for vaccines and want them are having trouble finding available shots. But New York City residents can turn to an unlikely resource to help—the subway. The digital, interactive MTA map created by Work & Co last year now includes data for 450 vaccination sites.

“Commuters can access the vaccine locations by tapping on the syringe icon at the bottom right of the map screen on whatever interface they are using,” writes Ad Age’s Ann-Christine Diaz. “Clicking on the specific vaccine sites will pull up the site-specific details, like the type of vaccine provided, eligibility information, hours of operation, cost and a link for appointment scheduling.”

Google is moving ahead with plans to stop using personalized ad IDs. Nestlé, Unilever and Mondelēz are already piloting a new framework for ads that do a better job of protecting consumer privacy, the tech giant said at the Interactive Advertising Bureau's leadership summit.

“Instead of personal ID-based ad targeting, Google is building what it has called a Federated Learning of Cohorts, or FLoC, which relies on aggregate pools of internet users, who can’t be identified individually to serve ads,” write Ad Age’s Mike Juang and Garett Sloane.

But competitors fear Google will leave them out in the cold, building “a system that mostly benefits its own business, while leaving out the rest of the ecosystem,” Juang and Sloane add. “That was a clear concern coming from IAB, too.”

All in the family: Oprah Winfrey’s Sunday night interview with Meghan Markle and Harry Windsor raked in 17 million viewers—and that’s just on this side of the Atlantic. The two-hour special ran in the U.K. Monday night, supercharging the already crackling rift between monarchists and anti-royalists. Britain’s original sin is class, so race is often overlooked as a point of contention, but Markle’s charges ring true to anyone who’s dealt with racial discrimination within their own family. If “The Crown” has cracked the façade of the royal family, this has the potential to shatter it in a way not seen since the death of Princess Diana nearly a quarter century ago.

Tough pill to swallow: Yet another shock to the system for those Brits who were able to catch a U.S. stream of the Oprah interview a day early on Sunday—American pharmaceutical ads, which appear atrociously in-your-face to anyone not accustomed to a for-profit health care system. “Ask your doctor if the NHS is right for you” just doesn’t have the same ring to it.

Here's looking at you, Bud: Anheuser-Busch InBev cut deals with A+E Networks guaranteeing that people actually watched its commercials. “The results mark a step in TV advertising as it works to match the compatibilities of digital targeting and effectiveness,” writes Ad Age's Mike Juang.