CHICAGO (AdAge.com) -- KFC's grilled-chicken launch was to be the biggest in the chain's history. Now it might also go down as a marketing case study in what not to do.

The story starts with a marketer testing the elasticity of its brand. After all, we all know what the 'F' stands for in KFC, so suddenly insisting the consumer associate the fast feeder with grilled chicken, rather than the Colonel's fried version, was always going to be a stretch. 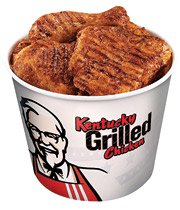 KFC thought the way to meet the challenge was to spend millions on a TV ad campaign from DraftFCB, Chicago. TV is a marketing channel that's worked well for other fast-food introductions, but the creative was simultaneously underwhelming and yet, by telling consumers to "Unthink KFC," seemed to undermine the chain's main game, fried chicken.

Whether it was working or not we may never know, because this was the point at which the marketer brought in the big gun, Oprah Winfrey, and the trouble really started. The company's offer on the daytime diva's talk show May 4 of two free pieces of grilled chicken, two sides and a biscuit to anyone who downloaded a coupon within a two-day period should have been a huge promotional coup. Instead, it turned into an unmitigated disaster when the company was unable to execute and actually had to rescind the offer.

KFC's offer sent the chain skyrocketing to the No. 1 topic on Twitter. By Wednesday, blogs began reporting "riots" at New York City KFCs. On Thursday, local news crews interviewed fuming customers getting turned away in other markets, including Chicago. Consumers complained about rude service, and media complained about a PR team that seemed asleep at the wheel. By Friday, the day after KFC pulled the promotion, NPR was calling KFC "the James Frey of fast food," referring to the author of a memoir praised by Ms. Winfrey that was later exposed as fiction.

In the end, KFC managed to strain relationships with three core constituents: consumers, the media and franchisees that swallowed the cost of the free food themselves. "This is going to damage their brand," said Gene Grabowski, senior VP, Levick Strategic Communications.

Just how did things go so far awry?

Multiplication
KFC spokeswoman Laurie Schalow maintained that the chain prepared thoroughly, given the time constraints. After months of seeking Ms. Winfrey's approval, she said KFC wound up with a one-week window to execute its promotion. KFC accepted Ms. Winfrey's projections for response, based on other offers from her show -- and doubled them. About 10.5 million coupons were downloaded, but in what might have been a twist unexpected by KFC, many were also photocopied.

In all, KFC gave away 4 million meals in two days. That sounds like a lot, but it pales in comparison to the 4 million pieces of grilled chicken it doled out April 27 alone when it declared a national "Unfry Day" in ads featuring Mr. Eaton. By the time KFC realized it wasn't keeping up with demand -- and there were 6 million or more coupons outstanding -- the chain pulled the plug on the promotion and issued rain checks to consumers willing to go back to a KFC, fill out a form and wait for another coupon to arrive in the mail. They'll be rewarded with a free Pepsi. The chain never called in a crisis firm.

News of the bungled giveaway became so widespread that Mr. Eaton appeared on Ms. Winfrey's show May 9 and offered this spin: "We had very big projection numbers on this, but not in our wildest imagination could we believe the response we've gotten," he said. "It's been absolutely fantastic. But in fact, it's been so big it's been overwhelming. Yesterday and the day before, some of our stores, our lobbies were full, the drive-throughs were packed, we had crowds everywhere."

Negative feelings grow
KFC did accomplish one thing -- a sea of buzz for its product. But the chatter got nasty when the promotion ceased. According to Zeta Interactive, which monitors blog chatter, KFC generally popped up in about 538 blog posts daily, with 72% of mentions positive. During the promotion, that number soared to 1,319 mentions, 89% of which were positive. But cutting the cord on Thursday had an immediate effect, with 772 posts. Negative ratings shot up, to 33%

"The free-chicken promotion created a sense of enthusiasm within online communities and enhanced KFC's online reputation," Al DiGuido, CEO of Zeta Interactive, said in an e-mail. "However, as soon as KFC decided to halt the promotion, their brand suffered a brutal backlash, plummeting down to 67% positive buzz.??With this overwhelmingly negative response, KFC did more damage to its brand by running an incomplete promotion than if they had just not launched the campaign in the first place."

KFC begs to differ. "We have never had more positive customer response," said Ms. Schalow, noting that about two in four grilled-chicken customers it's attracted are new or rare visitors to the chain. However, Technomic President Ron Paul said that's the group easiest to alienate.

KFC's chicken run will probably end up one of the all-time blunders by advertisers, and this publication has been there to chronicle them all. Here are some of our top choices, listed in no particular order.

NEW COKE: What was Big Red smoking? The Atlanta soft-drink giant bowed a much-hyped, much-sweeter formulation in 1985 and well, you know the rest of the story. It's enough to make Mean Joe Green cry.

KRAFT'S READY TO ROLL: It was consumers who thought they'd been rolled after Kraft accidentally printed too many winning game pieces in packages of its products in 1989, leaving some 10,000 folks looking for the keys to their shiny new Dodge Caravans. The pulled promotion ended up costing Kraft some $3 million to $4 million. Ouch.

HOOVER: A Hoover marketing deal in the U.K. crashed and burned after it offered a "buy a vacuum, get two free airline tickets" scheme. After incomprehensibly failing to realize that was the flier's deal of a lifetime, Hoover had to suck it up.

DR PEPPER: Coke might be it when it comes to the most boneheaded gaffe of all time, but Dr Pepper messed up big when it promised America a free fizzy if Guns N' Roses ever finished its "Chinese Democracy" album, which was 17 years in the making. Well, it seemed like a safe bet at the time.

MCDONALD'S BEANIE BABIES: The fast feeder tried to satisfy America's insatiable appetite for Beanie Babies during a collecting craze by giving them away for free with a Happy Meal. But McD's miscalculated. Instead, moms bought the meals and threw out the food. And the Golden Arches ran out of Beanies and had an angry mob of moms on its hands.

Got any others? Send them to [email protected]

How to hold an orderly giveaway

Massive giveaways don't have to wreak havoc on a restaurant system. Denny's gave away 2 million of its legendary Grand Slam breakfasts during an eight-hour period in February. With a smaller restaurant base, the chain was able to seat and serve its guests. And while most locations had long lines for the bulk of the day, there were few reports of unhappy customers. John Dillon, VP-marketing at Denny's, shared some top tactics for doing a big giveaway right.

Communicate, communicate and then communicate some more: Denny's executives toured the restaurant system, talking to franchisees and staff about the coming promotion. They also held town-hall meetings to share ideas.

Keep it simple. Make the offer clear and easy to understand. Hold it on one day and within a set timeframe. And make sure it supports an overarching brand strategy.

Pray for the best but prepare for the worst. "We did as much modeling as we could to plan through different scenarios," Mr. Dillon said."But at the end of the day, you don't know what to expect." Before the event, Denny's shipped thousands of rain-check coupons to its restaurants, just in case.

Don't hurry, or don't do it. Denny's planned its giveaway months in advance, and it took different forms throughout the process. But the planning paid off. "We heard of a couple of restaurants that ran out of syrup," he said.