Jaguar Positions F-Type Roadster as the Badass on the Block

Jaguar is launching its first two-seat roadster since Steve McQueen tooled around Hollywood in his E-Type in the 1960s. And the luxury carmaker is looking to tap into that old-school auto attitude with a $20 million campaign that plays up the 2014 F-Type's historic bloodline to Jaguar roadsters of the past.

Bruce Dundore, creative director of Jaguar ad agency Spark 44, wants consumers to view the two-seat convertible as "the baddest boy on the block."

"He's new on the scene, similar to the F-Type," said Mr. Torpey about the 49ers QB. "People have a lot of questions about him. They want to learn more about him."

Jaguar is also turning to the pages of "Playboy" for help.

One print ad running exclusively in the issue reads: "Uninhibited type seeks same. Introducing the Jaguar F-Type. If you're a thrill-seeker whose turn-ons include long fast drives at sunset, going topless, and embracing life at every turn, you've just found your soul-mate." 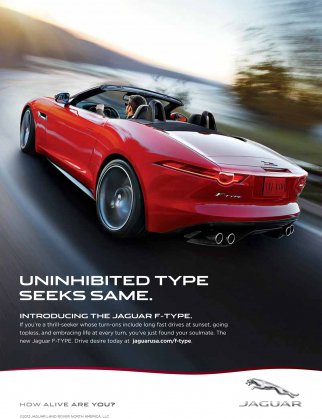 The campaign is called "Your Turn."

In one new spot, we see hundreds of people watching open-mouthed along a road as the F-Type roars by. Finally, a cool Brit hops out and flips the keys to the guy waiting at the head of the line. "Your turn," he quips.

To complete the bad-boy image, another F-Type spot will highlight the loud and distinctive sound of the engine. Each F-Type comes with a switch allowing drivers to control the roar of the exhaust.

"You can make it badass loud or badass, less loud. Each time it's badass. . . . We definitely want to wake up every dog in the neighborhood," Mr. Dundore said.

Starting this month, Jaguar will offer three models starting at $69,000, $81,000 and $92,000, not counting shipping and delivery. Jaguar's campaign will focus heavily on TV and digital media over the next three months with media buying and strategy handled by Mindshare.

"These folks are thrill-seekers. With this invitation of 'Your Turn,' we think we're really pulling them in," Mr. Torpey said.

Spark 44 inquired about using some of the iconic images of McQeen in his Jag E-Type but the rights were too expensive, Mr. Dundore said.

To better compete in the U.S., the British company has added all-wheel drive and V6 engines to its cars. But the F-Type will have to go up against the Porsche 911 as well as Chevrolet's new Corvette Stingray.

Ultimately, Mr. Dundore hopes the new nameplate can do for the Jaguar brand in the U.S. what the Miata two-seater did for Japanese auto company Mazda.

However, luxury car shoppers have long memories when it comes to the reliability of Jaguar, which still designs and engineers its cars in the United Kingdom.

Jaguar's "reliability has definitely come a long way -- but whether consumers realize it is the question," noted analyst Jeremy Acevedo of Edmunds.com. "A reputation for shaky build quality has a way of lingering with potential customers."

The stewardship of owner Tata of India (which bought Jaguar and Land Rover from Ford for $2.3 billion in 2008) has also been a "mixed bag," Mr. Acevedo said. But the rollout of Jag's F-Type and the popular Evoque crossover SUV by Land Rover show a "bold vision" Tata had not previously displayed.