As CMO of PepsiCo's Sparkling Brands, She Was Influential in Refresh Project 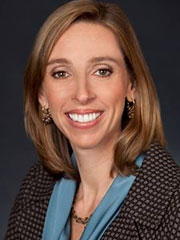 A replacement for Ms. Hobart has not yet been named. Jill Beraud, chief marketing officer, PepsiCo Beverages Americas, said there is a "deep and strong bench that will continue to build on the positive momentum [Lauren] helped establish for PepsiCo's [carbonated soft-drink] business."

Considered a rising star at PepsiCo, Ms. Hobart was influential in the launch of Pepsi Refresh Project, having promoted the effort internally and among PepsiCo's bottlers. Refresh Project, born amid a North American slump in carbonated soft-drink consumption, has been popular with consumers and is being expanded this year. It's not clear how the program has affected sales, however. In the first nine months of 2010, Pepsi volume fell 8.6%, while rival Coke saw volume fall 6.6%, according to Beverage Digest. Both brands saw their share of the market fall less than 1%.

Ms. Hobart, who was named an Ad Age Woman to Watch last year, described her role at PepsiCo as an "incredibly exciting opportunity." She said at the time that she hoped to bring growth to the carbonated soft-drink business, which has been soft. The category as a whole continues to be challenged, with early data from Consumer Edge Research showing a 4% volume decline for 2010. PepsiCo said during the third quarter, however, that its carbonated soft-drink position had been strengthened in the U.S., in part due to the successful relaunch of Pepsi Max.

Dick's has been gradually increasing its advertising spending over the last few years, spending $160 million in 2009, according to its annual report. The company has been performing well, reporting a 5% increase in sales at stores open at least a year and a 9% increase in overall sales during the third quarter.

Morningstar analyst R.J. Hottovy has forecast 9% growth for 2010 and 8% growth over the next five years. Dick's share of the sporting goods industry has more than doubled in the past six years, he said, but it still only controls about 8.5% of the market.

"In a relatively short time, Dick's Sporting Goods has established itself as the best-in-breed sporting goods retailer," Mr. Hottovy wrote in an overview of the company. "Over the next several years, we believe Dick's has a significant opportunity to expand nationwide and take incremental market share in the highly fragmented sporting goods industry, which represents roughly $55 billion in domestic sales."

Ms. Hobart, having worked with powerhouse brands like Pepsi, as well as presided over the 2006 relaunch of Diet Mtn Dew, is uniquely positioned to work with a large brand that still has significant opportunity. Her expertise at handling a brand that's constantly in the news could also be attractive to Dick's, which found itself the focus of media attention in November, when the American Family Association boycotted the retailer for its use of Holiday rather than Christmas. The retailer quickly revamped its messaging, changing its online "Holiday Shop" to a "Christmas Shop."

She's been described as "fearless," and Rob Schwartz, chief creative officer at Omnicom Group's TBWA/Chiat/Day, Los Angeles, said it's Ms. Hobart's aversion to playing it safe that makes her a smart marketer.

"At first, you might think, there's no way somebody that's this grounded would have the ability to think outside the box. But whatever you present to Lauren, she gravitates toward the edgiest stuff," Mr. Schwartz said last year. "She's got guts. She's really willing to look at a creative, unexpected idea. And she has the confidence to say, 'let's do it.'"