CHICAGO (AdAge.com) -- After more than a year of consumer research and agency brainstorming, McDonald's global chief marketing officer unveiled an updated take on its iconic, 7-year-old "I'm Lovin' It" campaign today before an audience of 15,000 franchisees, marketers and suppliers.

"I'm Lovin' It" is now the company's most successful and longest-running campaign, surpassing the iconic "You deserve a break today," and "Food, Folks and Fun," both in longevity and sales gains. The tagline actually predates CMO Mary Dillon, who took over McDonald's global marketing in 2005. "If you look at the business success, there would have been no reason" for changing the campaign, she said in a subsequent interview, "except for ego." 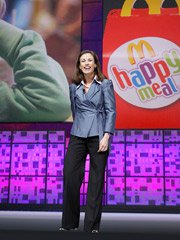 Mary Dillon
"All across our system, our marketing leaders and agencies in the U.S., Europe, [Asia Pacific, Middle East and Africa], Latin America, and Canada, we're building on our multibillion-dollar asset -- 'I'm Lovin It' -- and making it even better," Ms. Dillon told the audience, according to prepared remarks. "We're bringing it out from behind the arches and into the action to better brand and celebrate those uniquely McDonald's moments." New spots end with the tagline appearing by itself, and the arches appearing later.

"Even more importantly," Ms. Dillon continued, "we're making sure that we build both brand equity and drive sales with every piece of advertising." She described an approach that's more authentic, more saturated in consumer insights and emotion, and within "a framework that gives us a consistent point of view about our brand."

Besides, with different iterations in 117 countries and dozens of languages, wholesale changes are very expensive. "Launching and seeding awareness of a new tagline is a major financial undertaking," Ms. Dillon said. "You'd have to be very sure that you needed to do that" to ensure future success of the business.

Lifting the bar on global creative
While news of the upcoming reboot sparked speculation that McDonald's may be scrapping the campaign and starting fresh, Ms. Dillon said the campaign was still working, and so she charged the chain's biggest agency partners with making it better. Those included in the huddle: Omnicom's DDB Worldwide, TBWA and OMD; Publicis Groupe's Leo Burnett Worldwide, Publicis, Brazil's Taterka (in which Publicis owns a 5% stake), and independent Cossette in Canada.

The result is advertising expected to lift the bar on McDonald's creative around the world, said Mark Tutssel, global chief creative officer, Leo Burnett Worldwide. The work also appears to be funnier, more emotional and better grounded in a storyline.

For example, a Leo Burnett spot for the U.S. market sure to garner attention features a father bear treating his cub son to McDonald's after getting all A's on his report card (subjects include fishing and mangling). For them, that means using the cub as a decoy to attract a passing car so the father can then scare the passengers away. The pair eats McDonald's french fries that the tourists had been munching on along their scenic drive. There's even a lesson: Papa bear shakes the car to get a stray fry from the floorboard, and then tosses the vehicle. "There's always an extra fry at the bottom," he said.

And while this is a different take on what's been McDonald's everyday communication, Mr. Tutssel said it communicates key points such as family bonding, and fun with food. It also helps with unenviable task of getting marketing up to speed with the "I'm Lovin' It" promise.

Another U.S. spot, from DDB, depicts a woman returning from a trip, looking for her boyfriend in the airport, but spotting another man with a bag of McDonald's. When her boyfriend arrives, with flowers, she is polishing off her meal with the stranger. She looks at him and shrugs contentedly.

Yesterday, McDonald's reported first-quarter earnings that confounded Wall Street expectations, while same-store grew 3% globally, and surged 2% in the U.S. Ms. Dillon said she and her team take this as a sign that the advertising is doing what it's supposed to do.

~ ~ ~
CORRECTION: An earlier version of this story incorrectly identified quarterly same-store sales increases. The increase was 2%, not 6%.