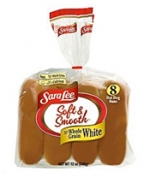 Sara Lee's long-rumored sale of its struggling bread business was generally well received by analysts, but nonetheless represents a bittersweet moment for the suburban Chicago-based company, which has been steadily selling off brands since 2005 to focus on a core line of food and beverage products.

The bakery sale, expected to close early next year, means Bimbo gets the rights to the iconic Sara Lee name for fresh baked goods in the U.S., although Sara Lee keeps it for its other products, such as frozen desserts and deli meats. Also included in the deal is Sara Lee's Earth Grains brand, along with several other smaller brands.

The sale of the bakery business "was likely difficult for the company to swallow -- giving up its namesake brand to another company," analyst group Stifel Nicolaus wrote in a note to investors. But "this divestiture will be a good one for Sara Lee in the long run."

The ad agency for Sara Lee bakery brands is Omnicom Group's TBWA/Chiat/Day, Los Angeles, which also handles Sara Lee brands such as Jimmy Dean, Ballpark and Hillshire Farm. Sara Lee's measured media spending on its bread and bakery products was $4.1 million in the first six months of the year, which is less than 20% of what it spent on all brands, according to Kantar Media.

Grupo Bimbo uses independent O' Leary and Partners, Newport Beach, Calif., as its agency for bread brands such as Oroweat, Francisco and Entenmann cakes and cookies. Bimbo spent $8.8 million marketing its brands in the U.S. in the first half of the year, including $4.8 million on its Arnold brand.

"At this point the relationships with the agencies remain unchanged," said Sara Lee spokeswoman Alissa Bolton. David Margulies, a spokesman for Grupo Bimbo's U.S. division, Bimbo Bakeries USA, said that "until the acquisition is approved, there are not going to be any changes other than would happen in the normal course of business."

For a while, bread seemed to be a key part of Sara Lee's more focused portfolio. The marketer got into the business in a big way about 10 years ago, when it acquired St. Louis-based Earth Grains, the No. 2 player in the U.S bakery market at that time. In 2005, Sara Lee upped the bakery ante again with the debut of its "Soft & Smooth" line of whole-grain breads marketed as white-bread taste with whole-grain nutrition.

But the company struggled to compete. The bakery division accounts for about 20% of Sara Lee revenue, but only 5% of consolidated operating income, said Morningstar analyst Erin Swanson.

"We've long believed that the domestic bread business was Sara Lee's Achilles' heel, with operating margins less than half of those generated by its regional peers, but we weren't convinced the firm would look to dispose of the business when it wasn't firing on all cylinders," Ms. Swanson said in a note to investors. "Even after the sale of its North American bread business, we still consider Sara Lee to be a viable takeover target , with potential interest from both strategic and financial suitors."

For Bimbo, the acquisition will grow its U.S presence from 34 bakeries and more than 7,000 sales routes to 75 bakeries and 13,000 routes, the company said.

"Sara Lee's concentration in the Midwest and Southeast and Northern California really compliments our core presence in the Northeast, Texas and the state of California," Gary Prince, president of the U.S. division, said on an analyst call.

The company pledged to invest more than $1 billion in the next five years to create an "efficient manufacturing and service platform."