READ THIS NEXT
Google gets fined and Avon gets flak for 'body-shaming': Tuesday Wake-Up Call 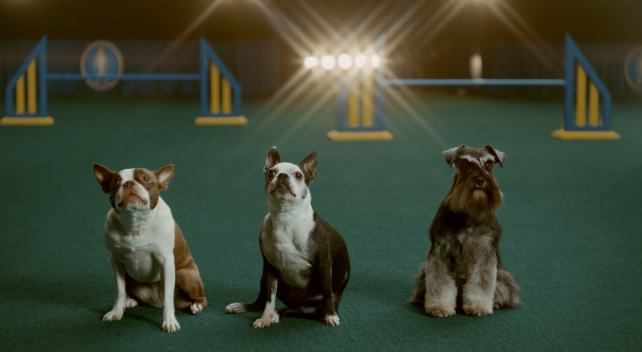 What people are talking about today
Good morning! We've got some new Super Bowl ad teasers to analyze and ponder. First, from M&M's, we've got a scene with actress Christina Applegate locked out of an SUV and getting seriously annoyed, Ad Age's Jessica Wohl writes. What does the scene have to do with colorful chocolate candies? Not sure.

In Avocados From Mexico's teaser, star of stage and screen Kristin Chenoweth gives dogs a voice lesson (why singing dogs?) while eating avocado toast (OK, we get that part).

And finally, there's an intriguing brief spot from Stella Artois for the charity Water.org; Ad Age's Jeanine Poggi wonders if this is a hint about the ad it's running in the Big Game Feb. 3. The ad has Sarah Jessica Parker reprising her "Sex and the City" role as Carrie Bradshaw, whose drink of choice was neither beer nor water but pink Cosmopolitans. What are we to make of these teasers? Will we finally see more women starring in Super Bowl ads this year? If so, let's raise our Cosmos in a toast.

By the way: Sign up for Poggi's Super Bowl newsletter for news and analysis in the runup to the Feb. 3 game. Yesterday, amid reports that CBS had turned down a Super Bowl ad for medical marijuana, Poggi offered this smart reminder: "Every year an advertiser or two tries to weasel its way into the Super Bowl conversation by saying their ad got rejected." Also, of course a cannabis ad was never going to get approved. Poggi writes, "It was only in 2017 that the National Football League even began accepting liquor ads."
Crystal ball: Ad Age's Anthony Crupi pored over historical data to predict whether Super Bowl ratings will jump this year, given strong playoffs ratings. His conclusion: "Signs point to 'maybe.'"

Free and ad-supported
Free, ad-supported streaming services are having a moment. So far this month, Amazon launched a new one via its IMDb movie-info platform, and NBC Universal announced plans to debut its own service early next year. Now Viacom says it's buying free streaming platform Pluto TV for $340 million in cash, reports Jeanine Poggi. Viacom, whose brands include BET, Nickelodeon, MTV and Paramount, sees potential for growth in Pluto, which claims 12 million monthly active users. Viacom President and CEO Bob Bakish said in a statement that the company sees "significant white space in the ad-supported streaming market." It's also a way to keep Viacom relevant to generations growing up with digital video.

High and dry
For some, January means Dry January, a newish tradition in which people abstain from alcohol to recover from end-of-year partying. (For those of you partaking in the cleanse and are counting the days, Feb. 1 is nine days away.) But January might not be so special. E.J. Schultz reports in Ad Age:

"There are signs that a more sweeping and permanent moderation movement is taking root among millennials. … The moderation movement is 'absolutely impacting beverage alcohol sales,' says David Henkes, a senior principal at Technomic, a market research firm covering restaurants. 'It's a huge issue for the industry.'"

Another factor affecting alcohol sales: the legalization of cannabis, of course.

Just briefly:
Whitewashing?: Japanese noodle brand Nissin apologized for a cartoon ad depicting half-Japanese, half-Haitian tennis star Naomi Osaka with light skin, The New York Times reports. A spokesman said "There is no intention of whitewashing. We accept that we are not sensitive enough and will pay more attention to diversity issue in the future."

Brand playbook: Ad Age's Jack Neff has a guide to how brands shoud use influencers. At Clorox, for example, "there's an expectation that every brand is doing some level of influencer work at a 10 percent level of their budgets," one exec says.

'Incredible sexiness': "One of the key attractions with podcasts is the incredible sexiness of the demographic," says James McQuivey, VP and principal analyst at Forrester Research. "They're the hyper-educated types that used to only be available through sources like The Atlantic or even NPR sponsorships, but now they abound in podcast land." Read more on podcasts from Ad Age's George Slefo.

Number of the day: Apple signed up Target and Taco Bell to use Apple Pay, "meaning that 74 of the top 100 US retailers by revenue now accept Apple's digital payment," Quartz reports.

Ad of the day: In the UK, KFC made a scented candle that smells like ... gravy. As Ad Age's Alexandra Jardine writes, the press release contains flowery quotes from the Colonel's "trusted parfumier," including the line: "The artisanal approach to creating the candles was crucial to ensure the familiar and evocative aroma of gravy was perfectly captured." Watch the video here (but sadly, there's no aroma).