P&G Polishes Image with Dads, But They Still Get Short Shrift on Father's Day
READ THIS NEXT
Peloton faces safety concerns and holding companies feel the pressure: Monday Wake-Up Call

Dads are getting more love from The Proud Sponsor of Moms this Father's Day, even if they're coming up shorter than ever in the gifting race and moms aren't fully buying their accounts of how much they do around the house. 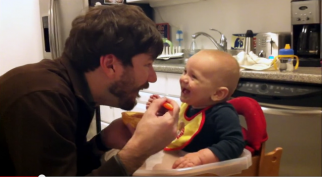 From Oral-B's 'Power of Dad' Video

Behind an effort to sell more power toothbrushes as Father's Day gifts, Procter & Gamble Co.'s Oral-B this month introduced a heart-tugging online video from Publicis Kaplan Thaler, New York, honoring dads through footage culled from YouTube. The "Power of Dad" video reached 5.8 million views in 10 days through a combination of social sharing and paid media on YouTube and Facebook.

Meanwhile, the corporate P&G brand, a.k.a "Proud Sponsor of Moms," chimed in with "The Daddy Effect" video from Grey, which has gotten more than 600,000 YouTube views in North America so far in the start of a global rollout. The campaign also involved soliciting video submissions on Facebook for another ad to launch this month.

Up to now, P&G has focused a lot more on moms than dads. A YouTube commenter on the "Daddy Effect" video, miffed that dads weren't recognized in prior Olympics advertising, said: "P&G has a lot of work to do to make up for their callous attitude."

But dads also get shorter shrift at home. A survey released from the National Retail Federation earlier this month found people plan to pay $119.84 on average on Father's Day gifts this year compared with $168.94 for moms on Mother's Day. So dads come up $49 behind, a gap that widened from $35 last year, thanks to a big 11% jump in planned Mother's Day spending vs. 2% for dads.

Throw in an Oral-B power toothbrush to top off the cart, at prices ranging from $11 to $94 on Amazon, and it just might balance things out. (Then again, the retail foundation said survey respondents were mentioning things like iPads and jewelry for mom this year).

While P&G doesn't have its mind on the gift gap per se, it does see an opportunity in getting more brands than Gillette -- a traditional Father's Day advertiser -- in on the action.

"We love our moms and celebrate moms, but we also think fathers are a little bit of the unsung heroes," said Rishi Dhingra, oral-care marketing director at P&G. "So we said this father's day why not celebrate the smile father has had for us all his life."

That unsung hero idea is confirmed in research: Dads think they do more around the house than ever, even if moms don't believe them. A survey for Johnson & Johnson's Babycenter by Men's Health released last week found dads are 180% more likely to say they help with new babies than they were seven years ago. But it also found dads are 50% more likely to say they do laundry than moms report. And while three in five dads say they prepare family meals, only two in five moms confirm that.

Either way, women still buy two thirds of Oral-B brushes, and the video is meant to appeal just as much to women and kids, Mr. Dhingra said. But Oral-B isn't a bad gift for the man who has almost everything in a market that still under-indexes Western Europe in power brushes, he said. Plus, it opens a new holiday front for a brand that does pretty well during the year-end holidays.