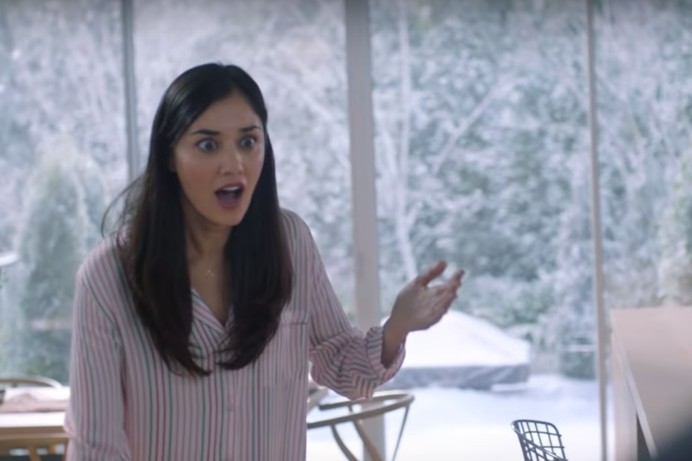 Peloton plummets
Peloton’s share price closed down nearly 9 percent on Tuesday, while social media commenters continued to mock the fitness brand’s viral-in-a-bad-way holiday commercial. On Twitter, the ad inspired a lot of adjectives: sexist, dystopian, tone-deaf, cheesy and just plain ridiculous. Peloton's ad is about a charming, fit woman who receives a pricey exercise bike as a gift from her husband. But that description fails to capture the commercial’s bizarre vibe, so if you've somehow missed it until now, watch it. “It’s a complete male fantasy ad,” Kit Yarrow, a consumer psychologist, tells Ad Age’s Adrianne Pasquarelli. Yarrow says that while the ad might not affect holiday sales, it could “dent the image of the company to women going forward.”

Besides the online chatter over the ad, other factors may be affecting the brand's share price. The Motley Fool writes that there had been a run-up in Peloton shares and says the brand had “become a battleground stock after shares touched an all-time high [Monday] on reports of strong Black Friday sales and a number of bullish comments from analysts.”

But anyway, back to that commercial, which is called “The Gift That Gives Back.” Peloton told Pasquarelli that the agency involved was Mekanism, which has done past creative work for the brand. The shop has not responded to multiple requests for comment about the ad, which showed last night on networks including ESPN, Lifetime, Bravo and HGTV, according to ad-tracking service iSpot. Whatever your thoughts are about the commercial, it's not off the airways yet.

TicToc vs. TikTok
Back in 2017, Bloomberg News debuted a Twitter-only video news offering called TicToc. It later became apparent that the branding wasn’t going to work; “since that time, the Chinese video app TikTok emerged as a global social-media powerhouse,” Ad Age’s Garett Sloane reports. Bloomberg has decided to ditch the TicToc name and call its video product QuickTake instead. “If I were in Bloomberg’s shoes I would do the same thing,” Mario Natarelli, managing partner at branding agency MBLM, tells Sloane. “It doesn’t make sense to double down on a name that is going to distract and confuse people.”

Changing of the guard
Google’s founders, Larry Page and Sergey Brin, are stepping down as CEO and president at parent company Alphabet. Sundar Pichai, the CEO of Google, will also take on the title of CEO of Alphabet. Page and Brin are major shareholders and will stay on the company board, Bloomberg News reports. But they’re pulling back at a tricky time; as The New York Times writes, “the internet giant is entering one of the most turbulent periods in its history, with antitrust scrutiny, employee walkouts and growing public skepticism of its power.” That’s not how the founders are casting it though. In an open letter, they wrote: “Today, in 2019, if the company was a person, it would be a young adult of 21 and it would be time to leave the roost. While it has been a tremendous privilege to be deeply involved in the day-to-day management of the company for so long, we believe it’s time to assume the role of proud parents—offering advice and love, but not daily nagging!”

Which is a cute metaphor but not necessarily a convincing answer to the question of, why leave now?

Back in the game: “Coca-Cola Co. will run a 60-second Super Bowl commercial, but the beverage giant has not yet decided on which brand it will plug,” E.J. Schultz writes in Ad Age.

Privacy: An umbrella group of ad industry trade groups groups released “a new set of guidelines to help shape future legislation regarding consumer data collection, as the industry looks to have some say in the inevitable regulations that are coming out of Congress and states like California,” Ad Age’s Garett Sloane writes. The group, which calls itself Privacy For America, has members including the American Association of Advertising Agencies, the Association of National Advertisers and the Interactive Advertising Bureau.

Number of the day: Nearly 190 million consumers went shopping in the U.S. between Thanksgiving and Cyber Monday, the National Retail Federation says. As CNBC reports, that’s up 14 percent from last year.

Ad of the day: Dad jokes are universal, apparently. A new French holiday ad for the Carrefour supermarket chain is about a family celebrating Christmas over the decades. While fashions and societal norms change, the same dad joke returns year after year. The ad from Publicis France celebrates Carrefour’s 60th anniversary, and it’s surprisingly poignant. Read more by Alexandra Jardine, and watch it here; you may even want to put its Françoise Hardy soundtrack on your playlist, too.