Experts Say His Endorsement Potential, Draft Prospects Depend on Whether He Was in on Hoax

Manti Te'o's dead girlfriend turned out to be imaginary. But the millions in salary and endorsements dollars the Notre Dame linebacker might lose due to one of the strangest sports scandals in years could be very real. 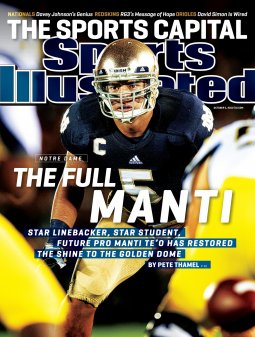 Notre Dame Athletic Director Jack Swarbrick called a hasty press conference Wednesday to portray Mr. Te'o as the victim of a hoax, even though Deadspin quoted a a person close to the situation saying there's an 80% chance the Heisman Trophy runner-up was "in on it" -- with an eye toward generating publicity.

Mr. Te'o is training in Florida and hasn't answered media inquiries. He issued a statement that in part read: "To realize that I was the victim of what was apparently someone's sick joke and constant lies was, and is, painful and humiliating."

But Mr. Te'o could fare a lot worse worse: He could feel the financial fallout for years as the former Fighting Irish linebacker prepares for the 2013 NFL Draft on April 25.

In his mock draft, ESPN draft guru Mel Kiper projected Mr. Te'o as a Top 10 pick (going No. 8 to the Buffalo Bills). But doubts about the Mr. Te'o's character could send his draft stock plummeting.

Some NFL club might decide it isn't worth the trouble to draft Mr. Te'o, NFL draft consultant Gil Brandt told the Associated Press. Based on 2012 rookie salaries, Forbes estimated Mr. Te'o could lose $4 million by falling from the Top 10 to the second half of the first round.

Former NFL executive turned ESPN analyst Bill Polian said the story might not affect Mr. Te'o's draft status at all if he truly turns out to be a victim. Still, the All-American football player will have to come clean with NFL executives and scouts.

"If he's simply the victim of a cruel and terrible hoax, I don't know if it will affect his draft status one iota," said Mr. Polian on ESPN's "NFL Live" show Thursday afternoon. If Mr. Te'o isn't, NFL teams will "cross that bridge" when they come to it, Mr. Polian added.

The more significant damage could be to the potential athletic endorser value on Madison Avenue of Mr. Te'o, who recently signed with Creative Artists Agency. He seemed to embody the best Notre Dame story since Knute Rockne and the Gipper: The Catholic school's most-popular player overcomes personal loss and tragedy to triumphantly lead the Irish to their first undefeated season in decades. In her dying words, his stricken girlfriend tells him to go out and win one for the team.

But if it turns out Mr. Te'o was cynically trying to generate sympathetic headlines for himself with gullible media outlets blinded by the Golden Dome, then sponsors won't touch him with a 10-foot pole, said sports marketing expert Bob Dorfman.

"If you can't believe him about his girlfriend, how can you believe him with a product in his hand?" asked Mr. Dorfman.

The amount of damage Mr. Te'o's marketability sustains depends on whether he's a victim or a perpetrator in the hoax. Said Mr. Dorfman: "This makes him look stupid and naive -- at best. At worst, it makes him look like a conniving liar trying to build a myth around his play."