See the Spot: KFC Dares With Double Down

KFC today unleashes its fabled Double Down, complete with marketing blitz to accompany the Atkins-friendly (if not artery friendly) breadless sandwich.

The Double Down, both loved and reviled, is returning for the first time since its 2010 launch, but likely only for a short time. The product is slated to be available until May 25. For anyone that somehow missed hearing about the Double Down the first time around, it's two breaded chicken filets in lieu of bread, with bacon, monterey jack cheese and a special sauce in between the chicken. 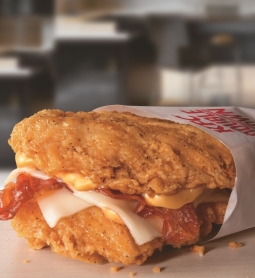 When the Double Down launched in 2010, KFC sold 10 million in one month. The product was so successful that the company extended the original month-long promotion, with some stores selling it through the end of the year. A spokesman for the company declined to say whether the limited-time window might be extrended again if it sells well.

David Menis, director-brand communications at KFC, said the Double Down is the most-talked-about product the chain has ever released, and that the chain looked to consumers' social media comments to drive the TV spot, which was created by Interpublic's FCB. "We structured the marketing so that it demonstrates fans' love for the product...the spot mimics the way people talk about the product online."

In the commercial, three young men in a dorm room talk about the virtues of the Double Down, framing the product as a near-mythical figure. "My sister ate it, she turned into a boy," said one character.

Mr. Menis said that the campaign is a continuation of KFC's latest tagline, #HowDoYouKFC, a slogan that is clearly directed at millennials who are heavy social-media users. The Double Down campaign will be accompanied by a big social media push called Double Down Dare, in which the chain will present four dares to consumers throught the campaign.

The first two dares, Mr. Menis said, will challenge consumers to create the best Double Down selfie and to create the best Double Down dance move. The hashtag for the social-media campaign is #DoubleDownDare, and each individual dare will have hashtags such as #DDselfie and #DDdance. A spokesman said that entries will be accepted via Instagram, Vine, Twitter and YouTube. "We won't be able to accept entries via Facebook, because privacy settings keep us from being able to see content, even if it is hashtagged," he said.

Winners will be awarded a cash prize, but other exceptional entries will receive a t-shirt that says "Bread is dead." 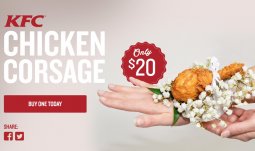 The Double Down announcement came in a week that has seen other absurd chicken antics. KFC, along with florist Nanz & Kraft, launched a chicken corsage just in time for prom. The product is simple: one of KFC's chicken pieces resting upon baby's breath – consumers have to go to a KFC to purchase the actual chicken, however. The cost is $20, and comes with a $5 gift card to purchase the chicken at a local KFC.

Domino's this week also released a product called Specialty Chicken. Though many news outlets described it as a pizza with a fried-chicken crust, the product is actually a variety of pizza toppings served set atop a dozen chicken bites.