Is Verizon's $23 Billion Bet With Fios Paying Off?

Analyst: Telco Spending $200 in Ads Alone to Win Each and Every Customer
READ THIS NEXT
Auto sales trends explained in 8 charts

SAN FRANCISCO (AdAge.com) -- It's been almost five years since Verizon wagered $23 billion to build Fios, the fiber-optic-service network that promised to upend the cable world. Since then, it has spent additional millions marketing it -- nearly $100 million last year alone. It's pulled out all the stops, even running a TV ad with jaw-dropping special effects featuring director Michael Bay, and a seemingly ubiquitous campaign that mocks a hapless cable installer continually outwitted by his counterpart at Fios. The tagline: "This is Fios. This is big."

Indeed, it's a big play. Verizon is banking on becoming the only national network to deliver super-fast internet and high-definition-video services. But has it succeeded in convincing consumers that cable companies are has-beens and its built-from-scratch network is the exciting new kid on the block?

So far, it appears to be falling short. Though Verizon has achieved a 27% penetration rate in the 16 states where Fios internet service is available (or 2.8 million Fios subscribers), it has its work cut out to reach its 35% to 40% penetration target, which would require adding 6 million to 7 million Fios internet customers by the end of next year. That's a rate of $200 in advertising alone per customer, according to Sanford Bernstein analyst Craig Moffett.

And even during Verizon's persistent assault, cable companies are managing to muster new subscribers. Both Comcast and Time Warner Cable reported results that beat expectations in recent earnings reports, netting close to 1.4 million new customers between them across video, internet and phone. Verizon picked up a combined 597,000 Fios video and broadband customers in the same period.

Though analysts give it credit for making strong strides, based on the milestones Verizon promised to shareholders and the penetration rate to date, if things continue on their current track, Verizon seems unlikely to meet its ambitious goals for FiOs.

Verizon, however, maintains FiOs' progress actually exceeded its expectations. "In mature markets where FiOS internet has been in service for two years, the penetration rate is 40%," said spokeswoman Bobbi Henson. "Last year, Verizon raised its FiOS TV penetration target from 20%-25% to 25%-30% because it was performing so well."

With ads come customers
One thing is clear: Sign-ups are very dependent on advertising. The company last year more than doubled its Fios video customers from 2007 after spending close to $100 million -- 88% more than the prior year -- in measured media to promote Fios, according to TNS Media. But between April and June last year, new Fios TV subscribers fell 50% from the previous quarter because Verizon had reined in promotion and advertising. The following quarter, it snatched 32% more customers after making more noise about Fios.

"Has it picked up a lot of the low-hanging fruit already?" asked Kurt Scherf, an analyst at Parks Associates. "The tough work is still ahead."

With most U.S. markets served by a single cable provider, Verizon may be getting an early easy ride, thanks to decades of consumer weariness from being locked into the cable companies. In turn, the cable guys are trying to overhaul their image, as evidenced by Comcast's 2-month-old campaign that stars a likeable cast of everyday people in a folksy sing-along.

"Cable companies are companies that people would love to hate," said James Willcox, an editor at Consumer Reports whose survey last year ranked Verizon Fios video No. 1 in customer satisfaction.

"Verizon ... may still be in a honeymoon period. They don't have the volume of customers that cable companies have because they're rolling out their service market by market," Mr. Willcox said.

High hurdle
With a penetration rate of 60%, broadband's growth has slowed to 8% this year from double digits last year, with telcos owning a 44% share to cable's 63%. But with cable operators dominating the paid-TV market with a 65% share, followed by satellite TV's 32%, Fios has a high hurdle to overcome, all the while carrying the burden of much higher costs than its competitors.

"Why ... would one assume that a new entrant, with higher costs, would be able to enjoy attractive returns by dividing up a market that isn't big enough for even one terrestrial network to earn a compelling return?" asked Sanford Bernstein's Mr. Moffett.

It's also unclear whether Fios is profitable for Verizon, which almost certainly has to discount its service to match cable's prices, Mr. Moffett said. Verizon's Ms. Henson said the company's target is for Fios to be profitable this year; the investment generated positive cash flow last year. "We're extremely pleased by the performance of Fios and the progress of the rollout."

Verizon is keeping Fios competitive by offering new promotions each quarter that include some kind of incentive to buy. Last year, a TV giveaway coupled with out-of-home guerrilla marketing, including posters deriding cable companies, yielded one of the highest recall rates among Fios campaigns, according to a person familiar with the promotion. Promotional ads for the service in the New York area pitch 100 HD channels and $100 cash back for consumers who sign up. McCann, New York, is FiOs' creative agency of record; Zenith Optimedia handles media buying and planning for Fios.

Bundling woes
One problem is that video carries a lower margin than voice or data, thanks to the hefty programming fees demanded by the likes of Disney and Viacom. That means Verizon has to hit hard at selling a bundle of services to make up for the low margins.

But unseating the incumbent bundle provider can be tough. Frost & Sulllivan's James Brehm said his company has done studies for Verizon and others showing that consumers who buy bundles are more invested with that provider and less likely to switch, owing to the convenience of getting one bill plus discounts for subscribing to multiple services.

One way to raise profitability is to keep existing customers around, since the installation and marketing costs are already covered. Verizon is managing to lock in customers by providing two-year price guarantees and requiring one-year service agreements, something not generally practiced by the cable companies.

And as a means to attract new customers, it is bringing convergence to all three screens. "The service providers really need to be focusing on providing more value than the bundles and finding ways to tie the consumer more closely to the services they're buying," said Forrester analyst Doug Williams.

Mr. Williams said the service providers can run features across all the services so that, for instance, when a consumer's phone rings, the caller ID pops up on the TV. Verizon is getting there. The company said Fios customers will soon get updates to their set-top boxes to connect TV to the web. The company will also be upgrading the TV widgets platform and opening it up to third-party developers, and it will integrate Facebook and Twitter applications. 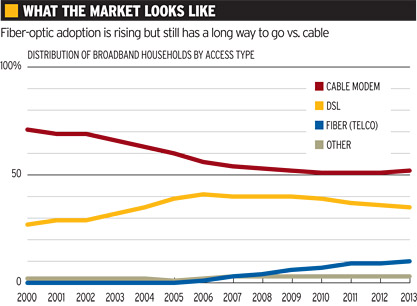 Fios by the numbers