Tuesday Wake-Up Call: Vogue insists Anna Wintour isn't on her way out. Plus, Grindr's under fire 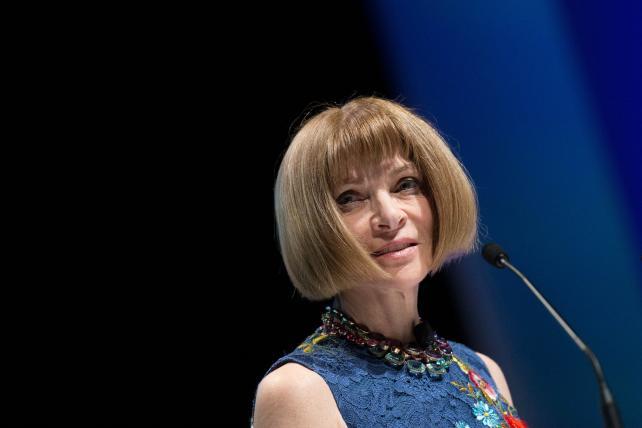 Welcome to Ad Age's Wake-Up Call, our daily roundup of advertising, marketing, media and digital news. What people are talking about today: Condé Nast and Vogue are denying a report that uber-tastemaker Anna Wintour might leave this summer. Page Six says it talked to multiple sources who say the 68-year-old Vogue editor-in-chief and Condé Nast artistic director will leave the publishing house in July. But Page Six notes that Condé Nast denies Wintour's exit "emphatically," and Vogue told The Cut that there was "zero truth" to it. In any case, this all brings up some reminders of the depressing state of magazine-land. As Page Six writes, "Under Wintour's watch as artistic director, Condé has closed the print editions of Teen Vogue, Self and Details and it has fought to compete online after closing down Style.com." Wintour has headed Vogue for 30 years; if you need a reminder of how influential she's been for how long, Wintour's first cover as editor-in-chief featured a model clad in a Madonna-esque crucifix and stone-washed Guess jeans. In other words, it was the '80s.

The future of agency fees?
The Ad Age print issue out this week looks at how agencies can future-proof themselves. Here's an idea from Mexico: As agencies are expected to do more for less money, some shops there are calculating fees based on how much content they produce for a client, Lindsay Stein writes. Twenty shops in the Mexican Association of Advertising Agencies use the model, based on a concept from chairman and CEO of New York-based consulting firm Farmer & Co., Michael Farmer:

There's a downside though: Some clients aren't into it, as you might expect.
More on the future of agencies: Ad Age's Jack Neff takes a look at brands taking programmatic media buying and social media production in-house. And Megan Graham checks out Chinatown Bureau, which is building what it calls an "operating system" for the creative process.

BMW, Twitter and Laura Ingraham
Over a dozen advertisers have dropped Laura Ingraham's Fox News show since she mocked Parkland student David Hogg for "whining" about not getting into a few colleges. (She later apologized.) BMW wasn't among them, for the simple reason that it hasn't advertised on Fox News since last spring. But as Ad Age's Jeanine Poggi reports, for some reason the Twittershere is "calling out BMW as one of the brands pulling its ads." As Poggi says, it's "another sign of the contentious political environment, not just for politicians but for marketers as well, not to mention the amplifying and sometimes distorting effects of social media."
Also: Citing Kantar Media data, Poggi says Ingraham's show lost half of its ad time since the controversy began.

Anger at Grindr
BuzzFeed News published an alarming report about gay dating app Grindr sharing users' HIV status with two outside companies that help optimize apps. Grindr did damage control, telling Axios that it doesn't sell the information or share it with advertisers, but people were angry nonetheless. Later Grindr said it would stop sharing such data with outside companies. That doesn't answer a few questions on many people's minds: Really, what was the need for sharing such sensitive user information with companies that manage Grindr's app performance? And also: How many Grindr users are aware that the app is owned now by a Chinese company called Kunlun Tech? In January, The Washington Post said China experts are asking whether the Chinese government could now "be in a position to demand sensitive and embarrassing details on the lives of millions of non-Chinese citizens."

Just briefly:
Parity: The North Face says that going forward, it will have an equal number of men and women in its advertising, as Ad Age's Adrianne Pasqurelli writes. Watch its new campaign here.

Sounds familiar: YouTube has a new way to buy ads in which marketers pay even "even if the viewer presses skip," Ad Age's Garett Sloane writes. "Kind of like TV."

The Mouse and the Fox: 21st Century Fox says the Walt Disney Co. is prepared buy Sky's news channel, "a move that could help Fox consolidate its ownership of the European pay-TV operator," The Wall Street Journal reports.

IPO of the day: Spotify's unusual initial public offering happens today. What's so unusual about it, you ask? Recode has a good explainer.

Misinformation: Malaysia's parliament has passed a law banning fake news, and critics worry it will be used to shut down dissent before an election, The Associated Press reports.

On a lighter note: Before she was a TV star and a future British royal, Meghan Markle was in a Tostitos commercial. It's worth watching because, as Marie Claire Australia writes, "the future princess will most likely never set foot in a supermarket again."

Word of the day: "empiggen." Ad Age's Simon Dumenco coined a word to describe a magazine cover depicting President Trump with a pig's snout. How do you use it in a sentence? Like this: "New York Mag empiggens Trump."

Scary supposed social trend of the day: After the inexplicable Tide pod challenge, a new dangerous and disgusting viral stunt is supposedly spreading online among teenagers: Snorting condoms through your nose and pulling them out your mouth. There's a flurry of reports on this trend in the last 24 hours; The Daily Beast, however, says reports are blowing this all out of proportion: "Don't worry, your teenager is probably not snorting condoms to go viral," it writes.

Creativity pick: What do you get when you mix a Denny's commercial with a promotion for "Solo: A Star Wars Story"? Watch it here, and read more by Ad Age's Ann-Christine Diaz. The spot, a co-promotion between the restaurant chain and the movie, was shot on the film's set. It's plugging "Solo"-themed trading cards, with proceed going to a non-profit called No Kid Hungry.