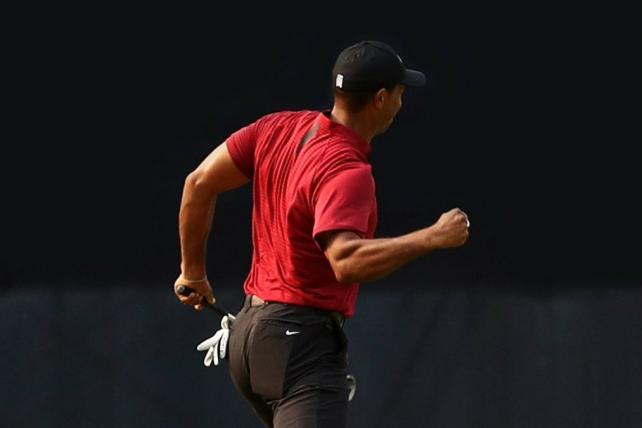 Nike seized on Tiger Woods' win on Sunday with an innovative use of Instagram.
Credit: Nike/Twitter

Welcome to Ad Age's Wake-Up Call, our daily roundup of advertising, marketing, media and digital news. You can get an audio version of this briefing on your Alexa device. Search for "Ad Age" under "Skills" in the Alexa app. What people are talking about today: Ad Age's 40 Under 40 list is out today, with up-and-coming executives chosen from over 700 entries. We've added something new this year: Our first 7 Over 70 list is recognition that good work is hardly just the province of youth, as the editor's note says. The honorees are all still deeply engaged at their companies. Take Cathy Hughes, founder and chairperson of Urban One, the largest African-American-owned multimedia company targeting urban audiences; she still plays an active role in ad sales. Check out the full lists here and here.

#JustDidIt
Tiger Woods just won the Tour Championship, his 80th PGA Tour win, and his first in five years. Woods clinched his comeback at age 42 after four back surgeries, as CBS News notes.
Nike, which stuck with Woods even during his 2009 sex scandal, made ingenious use of Instagram to congratulate Woods. The opening image shows Woods' back, with the caption, "He's done." Swipe to see the next photo, and you realize it's actually an extension of the first image, showing Woods celebrating his victory. The full caption is revealed: "He's done" becomes "He's done it again." The copy under the photo reads, "Never stop chasing your crazy dreams. #justdoit." Woods' comeback story fits neatly into Nike's new campaign starring former NFL quarterback Colin Kaepernick, which marks the 30th anniversary of its "Just Do It" tagline.
By the way: Nike's market value has jumped by $6 billion since Nike put controversial Kaepernick in its campaign starting Sept. 3, CBS News reports.

'VMLY&R'
Mark Read, the new CEO of WPP, the world's largest advertising holding company, is reportedly thinking about combining some of its big agencies. The Wall Street Journal reports that Read has said

"merging creative and digital firms makes more sense than combining creative agencies. One idea under consideration is a merger between Young & Rubicam and WPP's digital-ad firm VML, with VML Chief Executive Jon Cook leading the combined business, according to people familiar with the matter."

WPP, like other ad giants, has been facing cutbacks by marketers, competition from consultancies and digital disruption. Its path forward may now include something called VMLY&R—a possible name for the combined VML/Y&R entity, as The Journal reports. (Though it must be said, the name VMLY&R doesn't quite roll off the tongue.)
Also: MDC Partners—owner of agencies including 72andSunny, Anomaly and Crispin Porter & Bogusky—confirmed last week that it is considering options including a possible sale. The possibilities are many, as Ad Age's Megan Graham and E.J. Schultz write: "MDC agencies might buy themselves back from the holding company. Consultancies like Accenture Interactive or Deloitte Digital could swoop in and purchase the whole thing or cherrypick shops. … Or other holding companies might consider snatching up some MDC agencies." So yes, there are a lot of question marks in the ad industry right now. Happy Monday.

Sky-high
Cable giant Comcast won the battle to take over Sky, the European pay-TV company, beating out 21st Century Fox in an unusual auction hosted by U.K. regulators this weekend. The two companies have been dueling for months over control of Sky; Comcast's winning bid for a majority stake came in at nearly $39 billion.
What's in it for Comcast?: "The merger will help Comcast diversify its revenue base beyond the U.S., where cable cord-cutting is taking a toll on the traditional TV business," The Wall Street Journal notes. You can also look at Sky as a consolation prize for Comcast, since it lost a bidding war to Walt Disney Co. for the much bigger prize—Fox's entertainment assets.
What it means for Disney: It's certainly disappointing for Walt Disney Co. Though Disney will soon own most of Fox, it which would have liked to control Sky too. An additional complication is that Disney is set to own a minority 39 percent stake of Sky after the Fox acquisition, and it can keep those shares or sell them to Comcast, as The New York Times writes.
Through the looking-glass: Americans may not be familiar with Sky, but the same goes for Europeans and Comcast. In the U.K., The Guardian offers a helpful explainer to answer questions including, "What sort of business is Comcast?"

Just briefly:
Bye, 'Weight Watchers': The brand is changing its name to WW, which "shifts the focus from dieting to wellness," Ad Age's Jessica Wohl writes. The new tagline is "Wellness that Works."

"The Talk": Procter & Gamble's "The Talk," a look at the tough conversations about racism that black parents have with their children, won Ad of the Year at the AdColor Awards in Los Angeles. Read more by Ad Age's I-Hsien Sherwood.

Big tech: Julia Angwin and Jeff Larson have left ProPublica to launch The Markup, "a news site dedicated to investigating technology and its effect on society," The New York Times reports. The project received $20 million from Craig Newmark, the founder of Craigslist.

Vox: "Digital publisher Vox Media is expected to miss its revenue goal for this year by more than 15%," The Wall Street Journal reports. It's another reminder of the tough digital ad market in an age when Google and Facebook dominate.

Ad of the day: This is something we certainly haven't seen before. Six—six!—brothers and sisters of an Arizona congressman are appearing in an ad to attack their brother and endorse his challenger. The siblings support Democrat David Brill, who is running against their brother, Rep. Paul Gosar, a Republican, in Arizona's 4th Congressional District. Read the writeup by Ad Age's Simon Dumenco, who describes Gosar as a fringe figure who has espoused conspiracy theories. In response to the ad, the politician tweeted that his six siblings are "liberal Democrats who hate President Trump … like leftists everywhere, they put political ideology before family. Stalin would be proud." On that note, check out the ad here.

The schedule for Ad Age Next, our biggest annual event, is up now here. It features speakers including Alexis Ohanian and Bozoma Saint John, and companies from Twitch to Virgin Hyperloop. Next takes place Nov. 13-14 in New York.