Bad Design and the Greeble

A few days ago Core77 linked to an article entitled "John Scalzi's Guide to the Most Epic FAILs in Star Wars Design" that raised an excellent question many designers have pondered over the years: Why is the Star Wars universe so badly designed?

"Why doesn't Luke wear a seatbelt? Shouldn't lightsabers have certain basic safety features? Why does the Death Star have an open tunnel leading directly to a combustible central reactor? And why does the Emperor have a dangerously deep open shaft right next to his throne, with no handrail of any sort? (I'd at least put yellow tape around the edge of it.)"

Although the article doesn't cite the root cause behind this epidemic of bad design decisions, one of the contributing factors has to be the greeble.

Paraphrasing Wikipedia, a greeble is an element of detailing added to an object, explicitly designed to break up the surface and add nonfunctional complexity. A greeble adds to the illusion of scale because it breaks up the linear flow of the eye over an object. It's a term that comes from science fiction, particularly movie special effects. 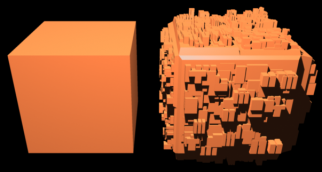 Kubrik's minimalist masterpiece 2001 had greebles and called them "wiggets." But Star Wars took them to the next level. The original Star Destroyers were an exercise in selective greebling, extraneous parts protruding everywhere on the overall form to give the effect of scale and drama. The Millennium Falcon is essentially one large greebled serving plate. The desire for an imperfect form is a quest for more believability, based on the idea that, as humans, we respond and empathize more with imperfection than the perfect sculpted object. There's also the obvious desire for cool techie-looking stuff. This from Wikipedia: "An anecdote from the creation of the first Star Wars movie involves the Tunisian customs enquiring what part of the costume of C-3PO (listed as "assorted greebles") was. Their response was allegedly 'Something that looks cool but doesn't actually do anything.'"

Thingsmagazine links to a visual essay called "Star Wars: A New Heap, 'Or: How I Learned to Stop Worrying and Love the Death Star'" by John Powers. He writes:

"In summary, George Lucas's Star Wars brought the aesthetic of the 'used future' into the mainstream, painting the technology and culture of an uncertain tomorrow (although the films were actually set in a distant past) as a bastardization of the sleek minimalist/modernism of the Empire. This ad hoc world, where everything is greebled to within an inch of its life, is deliberately contrary to the quasi-fascist aesthetic of the Galactic Empire ('a slapdash world of knuckleheads pursued by industrial-scale minimalists')."

As thingsmagazine recounts, this Lucas future-vision of dystopia, greebled to death and anti-minimalist, has become the accepted vision; "a flying saucer had never been a slum before" is for many (witness Ridley Scott and Blade Runner) a reality, the world as future-slum. Good design isn't really a priority in that world. Why bother with seatbelts in a speeder when the whole universe is falling apart?

Nick de la Mare
View all articles by this author