The AAPI community has never been—and will never be—the monolith the creative industry assumes it to be
READ THIS NEXT
8 ways Netflix can reimagine modern advertising
Credit: iStock

“Representation” has been an overused buzzword in recent years. However, the true advocacy and definition of authentic representation have not been fully achieved by advertising, marketing and creative industries, including mainstream media including film, television, music and tech—especially among those at senior executive levels. Representation has been less about creating visibility, but more about increasing relevance, resonance and relatability with a diversifying audience in order to increase sales, growth and loyalty.

Given the numerous conversations spotlighting the Asian American Pacific Islander (AAPI) communities and diaspora, we have all acknowledged the deep-rooted lack of authentic representation for AAPI communities in the creative industries. It’s even worse, however, for individuals and sub-communities that exist at the intersection of AAPI and other identities, especially LGBTQIA+. It is one thing to acknowledge the issue, but it means nothing if it is met with inaction or little to no real effort to create change. Acknowledgment should not be the stopping point for involvement with the issue. Industry people collectively still view and treat the broader AAPI community and identity as a one-dimensional monolith, which is a huge disservice to all individuals and groups that exist outside of the homogenous stereotype.

While there has been greater effort for increased AAPI representation—focused mostly on East Asians who have become the face of the AAPI identity—there are many diverse communities within the Asian and Pacific Islander diaspora that are still predominantly invisible in broader society: Southeast Asians, South Asians, West Asians (more commonly considered as Middle Eastern North African) and Pacific Islanders.

There is still so much work to be done to begin to be more inclusive and representational given the current state of where we are as an industry. This means it is unlikely that the priority for inclusion will be for LGBTQIA+ Asian Americans—which includes those who identify as gender-expansive, queer, non-binary, trans and/or 2-spirit.

As a queer and trans Asian American, I do not see myself represented at all, at least not my full self, without having to compartmentalize myself as either Asian American or queer and trans—but never both at the same time. I see only a sliver of myself in AAPI stories because they are too heteronormative and cisgender-focused for me to fully relate to. I see only the other sliver of myself in LGBTQIA+ stories, which are too white-centric and cisgendered as they represent mostly gay white men who have privilege, status and social mobility that is foreign to me (as it is with other QTBIPOC folks).

Not seeing myself reflected or represented is not a rare phenomenon, it is the status quo—one that has been all too common for a while now. In fact, over the past 13 years, only 3.4% of the top-grossing Hollywood movies (44 films) featured AAPI leads, according to the USC Annenberg Inclusion Initiative. Within those 44 movies, not a single person identified as LGBTQIA+.

This speaks volumes about the erasure and invisibility that LGBTQIA+ AAPIs like me experience day in and day out. It has become such a part of our day-to-day reality that we don’t even question it anymore. And it’s not because we don’t want to, but it’s because we can’t. Who would we approach to advocate for ourselves? We don’t all have the direct channels, pathways or opportunities to be in the necessary decision-making rooms to voice our need for visibility and representation.

I am surfacing this issue because it is our responsibility as members of the creative industry to address invisibility and create visibility for all members of the larger AAPI community. We fortunately do have the direct channels, pathways and opportunities to be in those decision-making rooms to echo, amplify and advocate for these individuals and communities—especially if we consider ourselves to be allies and supporters.

This is not a call-out but a call-in to every industry person, including those who are non-LGBTQIA+ AAPI and non-AAPI LGBTQIA+.

The most important way to tell authentic and inclusive stories is to ensure that talents in front of and behind the camera come from the LGBTQIA+ AAPI community. It takes real people with real-life experiences to tell real stories that are not from an outsider’s perspective. There is value beyond profit in amplifying stories. Authentic representation of authentic stories has a positive effect on individuals within communities by making them feel seen, acknowledged and heard. We would be remiss to not celebrate the full spectrum of Asian American Pacific Islanders and the intersectionality across the full spectrum of the LGBTQIA+ community.

This is just the beginning and the tip of the iceberg, so let’s get to work. 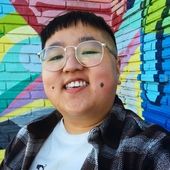