Opinion: Advertisers must guarantee diversity and inclusion on both sides of the camera | Ad Age
Skip to main content
Sign In Register

It’s been nine months since the death of George Floyd. This moment in time incited a frenzy of performative allyship—grand gestures creating the appearance of change while maintaining the status quo. We need only look at the Super Bowl lineup of commercials to see the same presumed "safe" directors filling director chairs. The Big Game was a wake-up call our industry desperately needed—a reminder that we must stay vigilant about ensuring diversity all year long, and on jobs big and small.

It’s also important to note that this really isn’t a conversation about fairness, but about opportunity. The opportunity for creative and ads to be better. The opportunity to hear a different point of view that actually advances things. The opportunity for representation to grow so that it inspires the next generation. I have thought a lot about what can be done. Here are seven ways advertisers can improve director and production diversity:

Recognize the difference between lack of talent and lack of opportunity

Perhaps the director you’re considering hasn’t done a Super Bowl spot or doesn't have exactly what you’re looking for on their reel. Dig a little deeper and consider their talent, their shot selections, how they direct talent, their art direction, etc. From this perspective, you might be surprised to find that their work actually resonates with the creative.

Prioritize diversity, equity and inclusion across the board

From production to editing to finishing to audio, take a 360-degree view of a project from concept to completion to level the playing field.

Start a Google doc that is referred to when starting a job. Resources like BidBlack and Free The Work showcase and champion underrepresented groups.

Ensure that 15% of the crew is diverse

Have conversations with vendors and include in their specs a suggestion that 15% of the crew should be diverse—focusing on heads of departments.

Prioritize diversity and inclusion on every project

Check the last 10 jobs to see who directed the projects, and internally review the bidding process to look for improvements.

Work with minority-owned companies to further industry diversity and representation

Allocate a certain percentage of jobs to minority-owned companies. It’s important to disclose that I am the owner and executive producer at Eleanor, a Black- and women-owned production company. There aren’t a lot of minority-owned companies and, if we are to change that and inspire more to be founded, then we need support because representation matters. I would also like to name some other amazing minority-owned companies: Prettybird, Contrast Eye, Invisible Collective and Quriosity Productions.

Getting included in the bid pool is only half the battle; following through with awarding helps with diversity above and below the line.

It’s not enough to have representation in front of the camera. Diversity and inclusion must also happen behind the camera, so our industry better reflects the world we live in. Let’s create a new normal. 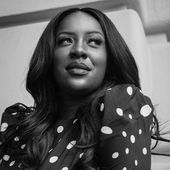