The Truth About the NFL Ratings Slump: It's Not the Anthem Protests | Ad Age
Skip to main content

The Truth About the NFL Ratings Slump: It's Not the Anthem Protests 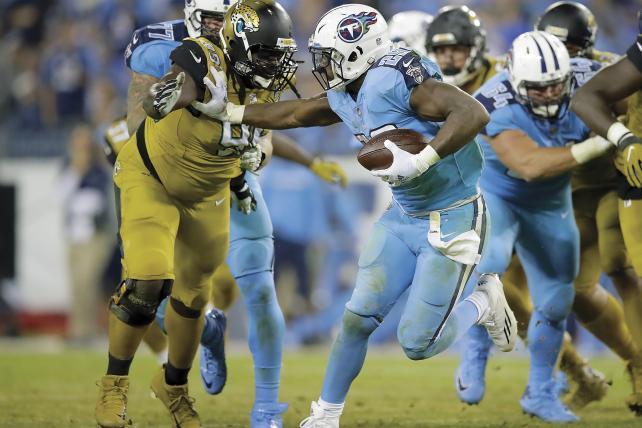 DeMarco Murray, No. 29 of the Tennessee Titans, stiff-arms Sen'Derrick Marks, No. 99 of the Jacksonville Jaguars, as he runs with the ball during the third quarter of the game at Nissan Stadium on Oct. 27.
Credit: Andy Lyons/Getty Images

Last Thursday night, NFL Network aired its second primetime game of the 2016 season, a bumbling, viewer-repelling affair featuring two teams that have made a cottage industry out of rank futility. At halftime, the Tennesee Titans were up 27-0 over the Jacksonville Jaguars, who'd scratched out all of five rushing yards while gaining just three first downs.

That the game was essentially unwatchable should have come as no surprise to anyone who has ever inadvertently stumbled across one of the biannual meetings between the Jags and Titans, neither of which has generated a winning record in this decade.

For all the attendant horrors of the Jags-Titans disaster, however, it wasn't the worst game to air in primetime this season. It wasn't even the worst to air in October. The month's biggest stinker may well have been the Oct. 23 "Sunday Night Football" contest between the Seattle Seahawks and Arizona Cardinals. The enervating 6-6 draw featured 15 punts, 24 flags and a pair of improbably muffed field goal attempts in overtime. It was like watching a moderately intelligent cocker spaniel try to learn to play Madden NFL 17.

Or perhaps you caught the Cardinals' curb-stomping of the Jets during the Oct. 17 "Monday Night Football," a 28-3 dismantling that was interrupted so frequently by the zebras that ESPN play-by-play announcer Sean McDonough ripped the officiating crew for their role in making the game all but unendurable. "If we're looking for reasons why TV ratings for the NFL are down all over the place, this doesn't help," he said after officials called penalties on two successive plays. "The way this game has been officiated is not something anybody wants to watch."

That's a dead-on assessment of one of the endogenous factors that have contributed to the NFL's much-lamented ratings declines: Through the Oct. 27 Jags-Titans blowout, officials have stopped the games 1,786 times to call hundreds of phantom defensive pass interference, unsportsmanlike conduct and taunting penalties.

And perhaps no one has more latitude to carp about lousy football than ESPN's Mr. McDonough, who's had to preside over some singularly noncompetitive games. The average margin of victory for a "Monday Night Football" game this season so far is 17.3 points, up from 9.6 points in the year-ago period.

Applying Occam's razor and picking the simplest explanation for the NFL's ratings slide—i.e., the games aren't worth watching, and the refs are only making it worse—admittedly leaves out a host of other quantifiable contributing factors. There's the 80% traffic declines at DraftKings and FanDuel sites, for example, suggesting that the daily fantasy football craze is on the wane. And then there's the surreal election cycle, seeing cable news networks take share from the NFL windows.

But at least one working theory deserves to be cut from the 53-man roster for lack of supporting evidence.

Citing a single landline poll by the right-leaning Rasmussen Reports, news outlets this month have been falling all over themselves to assign blame to 49ers quarterback Colin Kaepernick's national anthem protests. Yet the key findings aren't supported by the Nielsen data.

While twice as many white respondents told Rasmussen that they were less likely to watch the NFL this season in light of the anthem protests, white viewership is down 12% year-over-year, versus a 14% decline among black viewers. Rasmussen also concluded that "the more one earns, the more likely they are to say they may be shutting off NFL games." In reality, NFL viewership among viewers from households with annual income of more than $75,000 is down 14%, while those below that salary divide have trimmed their football intake by 19%.

Whatever the root cause of the NFL's dwindling TV audience, it's important to remember that the pain has not been distributed equally. The ratings drops primarily are being felt in the standalone primetime windows, with "Monday Night Football" deliveries down 22% through Week 7, "Sunday Night Football" off 19% and "Thursday Night Football" taking a 17% hit. In the meantime, Fox's top-rated "America's Game of the Week" broadcast thus far is up 1% in total viewers (26.1 million) and off two-tenths in average household rating (14.8).

While the primetime under-deliveries will lead to a higher-than-expected distribution of audience deficiency units, the tightening of available gross ratings points is actually driving up the cost of buying NFL scatter inventory.

According to Standard Media Index data, the average unit cost of a 30-second NFL spot in September was $509,193, up 8% versus the year-ago period. NBC's Sept. 8 NFL Kickoff broadcast thus far has fetched the highest rate for an individual game ($750,954), and "Sunday Night Football" remained the priciest primetime package with an average spot rate of $680,762 a pop, Standard Media Index said. Fox's blended Sunday afternoon windows commanded $548,843 per :30, while units across the combined CBS 1 p.m. and 4:20 p.m. games were priced at $433,422 a throw.