Case Study: The Effects of a Three Martini Lunch on the Creative Process | Ad Age
Skip to main content
Sign In Register

Case Study: The Effects of a Three Martini Lunch on the Creative Process

Agency Execs Volunteer for Crucial Experiment
READ THIS NEXT
Gut Checks and Guardrails: 6 Ways to Stay Small When Your Agency Gets Big
Welcome to the club, Don Draper! As we see the new small(er) agency as the setting for this season's "Mad Men," I thought it was appropriate to share a little experiment I conducted with the heads of fellow small agency Stick & Move, whom I have mad respect for given their creative chops and ability to have fun.

The experiment: When you drink at lunch, do you become more creative?

The setting was Butcher & Singer, a throwback steakhouse in Philly where if you ask for a drink menu you'll probably be shown the door. The subjects: myself, Agile Creative Director Matt Hanemann and S&M founders Jared Scott and Steve O' Connell.

The fictional assignment: Atari has 500,000 units of the old 2600 console and it has to move them. Quickly. What would either agency do to promote something so simplistic in the world of the Wii?

So at approximately 12:32 PM we ordered martinis -- to the bartender's sheer delight -- and sat down for burgers. Steaks in the afternoon seemed to be more ridiculous than alcohol in the daytime for some reason.

What I observed from the group:

Martini No. 1: We were jazzed about the opportunities that existed through this kind of project. On its face, of course you can't compare the old Atari to the graphically and technologically superior PlayStation, Wii, et al. But maybe there was an old-school element that would create major appeal for the 40-plus set. Good points were made that as things became more advanced, maybe there was a collective public yearning for something simple.

Martini No. 2. Man do the creatives get fired up after some firewater! It was a t?te-?-t?te between Matt and Steve on the subject of "What is hip?" Is the Atari so outdated that it would be cool-in-a-retro-way to own one again? I recall someone making an argument about Target selling flannel shirts and whether that meant the big T was so far behind the times it was actually pioneering new ground. The word "hip" was steamrolled as a completely un-hip word in its own right. Ironic.

Martini No. 3 (which we hardly got through). Jared tries desperately to get the group back on track, reflecting what we've all been through in any brainstorming session. At what point is something so off course its forging new thinking -- or simply making us nuts? We had gone from how to promote Atari to diatribes on society, politics, and large chain stores. 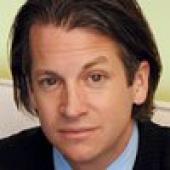