We really don't know who's going to own Hulu at the end of the month, but that hasn't stopped the company from innovating in the way it shows video ads to consumers.

The video site has been allowing viewers to choose their own pre-roll ad through its Ad Selector for the past couple of years. The next evolution of that is to allow viewers to stop any ad they don't like and swap it out for another. 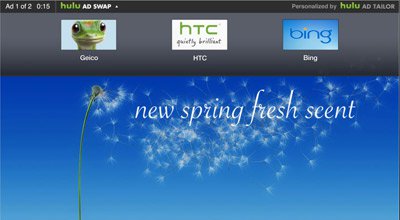 Don't really want to watch an ad for Lysol? Hulu's Ad Swap will allow viewers to do just that -- swap it out for, say, an ad for Geico or Sprint. Hulu has never allowed users to skip ads, but it carries an ad load low enough -- about four minutes per half hour compared to eight on TV -- to ease the burden on consumers and give sponsors a greater share of voice during programming.

While Ad Swap will give consumers a little more control over the ads they're watching, it will also give Hulu a new trove of data on consumer preferences. Hulu is already assembling detailed profiles of users using their viewing history; now they'll add to that their preferences around ads, which will improve targeting.

Explains Hulu Senior VP JP Colaco: "You come into an ad experience; we use targeting to send you an ad. Now what we're doing is giving users the ultimate option -- if for whatever reason you don't want to watch the ad, you can swap it out."

Hulu acts essentially as an ad network for online TV. It can't sell individual shows, which would compete with its network partners, which sell their own shows on their own sites and have the option to buy back inventory from Hulu. Rather, Hulu sells audience across all of its library of content, which includes programming from ABC, NBC, Fox, Comedy Central, MTV and other networks. Hulu is also working primarily with 30- and 15-second ads made for TV with little inherent interactivity, which puts the added onus on Hulu to innovate in ad targeting.

Hulu is planning to make all their ads swap-able in the coming months, first on the PC and then on other devices such as Xbox, connected TVs, iPads and Blu-Ray players. Hulu serves more video ads than any other online service, nearly a billion in August alone, according to Comscore.

Part of the theory here is that when given a choice, consumers are more engaged and thus more likely to remember the message. Hulu's own research shows that recall of ads picked on the similar Ad Selector have twice the recall of a standard ad. In tests, Hulu says recall of a ad chose through a "swap" has 93% greater recall. If a viewer opts out of an ad, Hulu won't bill for the partial impression.