In October 1997, Mastercard launched its first "Priceless" commercial -- a young boy and his father attending a baseball game -- and spawned a pop-culture phenomenon.

The campaign's formulaic approach, ending with the word "Priceless" has been imitated by "Saturday Night Live," David Letterman, "Today" and countless consumers. It's aired in 112 countries and 53 languages. And it's had a significant impact on how consumers view the brand. In 2008, Mastercard ranked as No. 99 on BrandZ's list of the 100 most valuable brands with a brand value of $7 billion. Four years later, the brand is ranked No. 29 and valued at $20.8 billion.

"It has become one of those iconic campaigns," said Alfredo Gangotena, chief marketing officer of Mastercard Worldwide, noting it was a "profound moment" when the company landed on the idea that experiences matter more than things. "It's one of the most significant advertising campaigns ever." 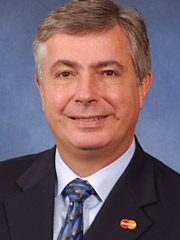 Mr. Gangotena, who became CMO two years ago, conceded that it's an accepted practice for new CMOs to come in and rip up the playbook, putting their mark on advertising. "You know you've all done it," he said to laughter from the audience at ANA's Master of Marketing conference. But Mr. Gangotena gave kudos repeatedly to his predecessors and the creative teams involved with the campaign. Mastercard works with McCann WorldGroup. He said there was no reason to abandon the Priceless campaign given its success. But 15 years later, it is time to evolve.

The company developed a concept in 2011 dubbed "Priceless Cities" to link consumers with the places they live. The idea, Mr. Gangotena said, is to connect people to their passions, whether that 's shopping, dining, sports, travel, theater or music.

"We're not focused on the volume of transactions. That's not the point," he said. "The point is to be very close to the consumer."

Mr. Gangotena shared several executions from the campaign, including "Check In to the Ballgame." Mastercard teamed up with R/GA and Facebook Places in a challenge that asked consumers to find 20 decommissioned Yankee stadium seats around the city in order to win VIP tickets to a Yankees game. The chairs were hidden in New York restaurants, shops and landmark public locations.

In another execution, a young British woman is in the back of a limousine jamming to a song by British artist Jessie J with her girlfriends. The vehicle slows and Jessie J jumps in to sing along. The video kicked off a "Priceless Duet" contest, which was part of Mastercard's Priceless London effort.