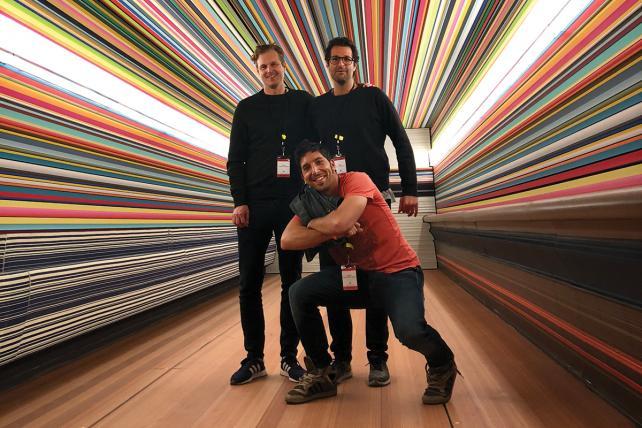 When thinking of ideas, TBWA/Media Arts Lab trio Robbin Ingvarsson, Arnau Bosch and Kako Mendez are usually "locked in a room, building decks and writing things on paper," says Mendez. What emerges from that closed-in space? Awe-inspiring worlds for Apple. Most notably is the mesmerizing HomePod launch film, "Welcome Home," directed by Spike Jonze and starring FKA Twigs, which many have pegged as a top Cannes Lions contender. The team was also behind Apple Music's rebranded identity, which imagined a pair of musical notes in a panoply of wild design styles, and an Emmys spot for the Apple Watch that saw skateboarder Kilian Martin defy gravity while drifting through a busy train station.

The team started working together at 72andSunny in Amsterdam before moving to Media Arts Lab. Bosch and Mendez are from Spain, while Ingvarsson is a Swede. Mendez is the "creative tornado" of the group, described by his colleagues as a walking, talking IMDb, says Ingvarsson. Ingvarsson brings the keen design with impeccable "Swedish taste," says Bosch. And Bosch, says Mendez, is the people person with out-of-the-box tech and music references—stuff that "pushes us to come up with stuff that doesn't have that sell-y smell."

"We're all driven by the same hunger to make good work," Mendez says.

They also have a shared love for '90s experimental music videos and the films of directors like Jonze, Michel Gondry and Chris Cunningham. Which brings us to "Welcome Home." In it, FKA Twigs plays an uncharacteristically drab nine-to-fiver who, back at home after work, asks Siri to play something she'd like on her HomePod. Her world is then transformed into a colorful wonderland as she dances to Anderson Paak's "'Til It's Over."

The idea "started with the product and its great sound quality," Mendez says. "We thought that great sound has the power to make any space sound bigger than it is. And we can all relate to that moment when you need some emotional and mental space. We wondered what would be the most telegraphic way to convey that feeling, so we wrote a story where a person's tiny house started expanding as the music filled the space."

As for the choice of Jonze, Bosch says that "like most in the industry, we've spent all our careers referencing his work." The director was the one who then suggested FKA Twigs.

"The idea of seeing her playing an everyday person was very interesting," Robbin says. "It's a side of her the world hadn't seen yet." Her audition, which appears in a behind-the-scenes film released after the ad, "left us speechless," he adds. "Her unique dancing style felt perfect, but we were shocked by her acting chops."

The trio doesn't have a typical approach to tackling creative problems. "We adapt on every situation and we move pretty comfortably in the middle of craziness," Bosch says. "Things move usually pretty fast, so the best idea surfaces almost by itself."