Here’s a product line extension we didn’t see coming. Eco-friendly feminine products brand Tampon Tribe added snacks to its lineup of goods. Monthly Harvest Kale Chips were an idea conceived by LAB13, the innovation arm of MRM McCann. The brand had asked the agency to come up with a way to increase customers’ basket size. The chips also help to underscore the company’s committee to sustainability—they’re produced using the same natural processes as its tampons. Moreover, kale, which is rich with iron and calcium, is known to help relieve menstrual cramps.

Life insurance isn’t the most creatively exciting category, but as demand for the product heats up in the midst of COVID, Austin-based agency Preacher created this funny and super-relatable campaign about why consumers should be thinking about buying policies. The trio of spots is not shy about broaching the subject, reminding people of how they’ll be leaving their loved ones in the lurch if they kick the bucket: a woman gets mom-shamed at the playground, and a son sells his family’s trash because he needs to save money for after his mom passes on (as his mother stands there, watching).

Both New York Magazine and TIME came out with stunning covers to remind people to get out and vote. New York Magazine tapped 48 artists—Shepard Fairey, KAWS, Barbara Kruger and many others, to create new takes on the “I Voted” sticker. Four different covers feature groupings of 12 labels, which New York Magazine says will give people a different look to wear until election day.

For the first time in its 100 years, TIME magazine dropped its logo. In its place, it features the word “Vote” atop an image of a mask-wearing woman. Shepard Fairey was on board for this one as well. 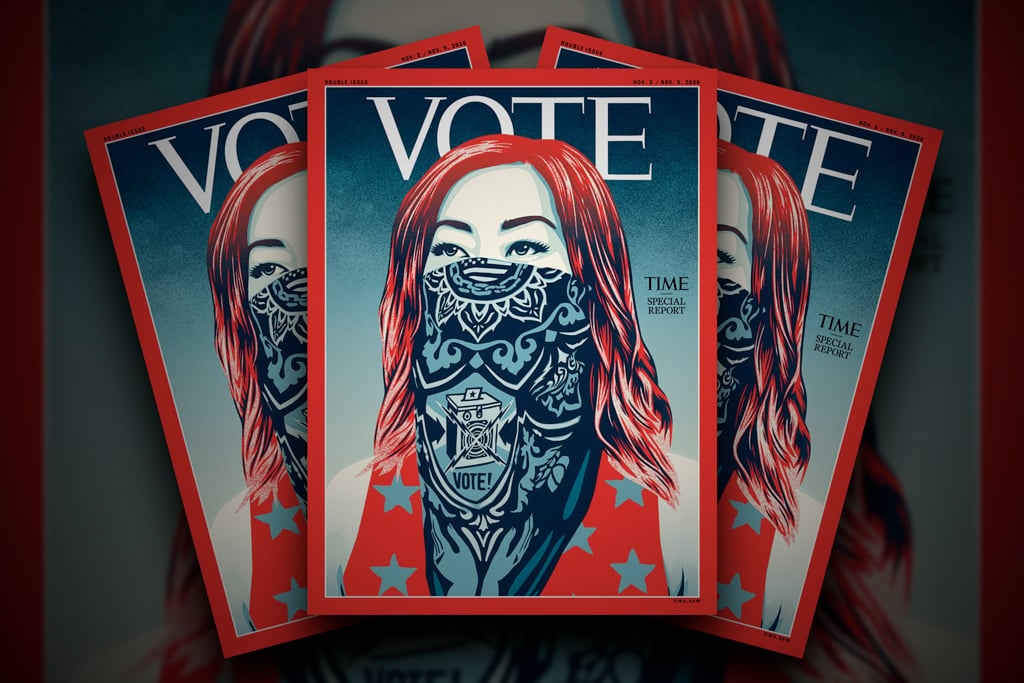 The New York MTA finally resolved an ages-old creative “fight” with its design overhaul of the NYC subway map. In the early ‘70s, Italian designer Massimo Vignelli created a minimalist, modernist map, widely praised for its elegant simplicity. Yet its inaccuracies left much to be desired in terms of its actual utility. A later version from designer Michael Hertz prioritized information and geography, but lacked the beauty of the Vignelli design. This week, however, agency Work & Co unveiled a new, interactive real-time edition, which boasts the best of both worlds. At first glance, the map features the exquisite spareness of Vignelli’s, but as users zoom in it reveals the rich information provided by the Hertz rendition—plus a whole lot more. The new map also provides real-time updates of schedule changes and also shows where the trains are traveling at any given moment. The process of creating this design was captured in a fascinating new film from documentary filmmaker Gary Hustwit.

At long last, the political ad we’ve been waiting for throughout this angry, contentious, hyper-partisan election cycle. In Utah, Republican Spencer Cox and Democrat Chris Peterson are running for governor. But this week, they appeared together in a series of spots reminding voters that they can still stand together as Americans, even though they’re on separate sides of the aisle.

The ads feature a simple set up with each candidate, safely distanced, standing against a white backdrop. While each one still says, “Vote for me,” they remain gracious toward each other and make a commitment to “American civility and a peaceful transition of power,” no matter who wins on election day. While there’s nothing particularly special about the execution itself, the idea to bring the two together in a single message is probably the most refreshing we’ve seen in a long while—a glimmer of hope that a more peaceful, respectful reality is in the offing. And, for election ads, it’s one for the history books.

The ads were created out of Salt Lake City-based Boncom, an agency focused on partnering with “purpose-driven brands who are focused on creating more good in the world,” it says on its site.