At Ad Age's Digital Conference, Converse, Lexus, Dell and Best Buy Reveal Digital Strategies
READ THIS NEXT
How restaurant chains are duking it out to be the best in their categories

For all the bluster around how digital marketing will disrupt traditional advertising, some marketers have already started to shift more media dollars toward social sites.

At Ad Age's Digital Conference today, Converse Chief Marketing Officer Geoff Cottrill said the footwear maker is spending less than 10% of its marketing dollars on traditional media with the other 90% going toward emerging media.

"Social media is unavoidable," he said, pointing out that on platforms such as Facebook, a brand manager no longer controls the conversation around the brand's image. "When you realize you can contribute to the conversation, the better off you'll be," he explained. While that strategy of standing back may be a risk, it stands as the best tactic in an arena where authenticity is the underlying conceit.

Luxury car maker Lexus is also concentrating more of its media efforts toward digital plays. While TV is a key ad strategy for Lexus, it's "less than 50% of our media spend," CMO Dave Nordstrom said. "Most of the rest is on some form of emerging media." He pointed out Lexus' sponsorships on YouTube and work on its iPad apps. "We've got to go many different ways," he said. "Consumers are consuming media in many different ways, you have to give it to them in bits and bytes the way they're used to consuming it."

Still, other major companies see more direct sales potential in social media. Dell CMO Karen Quintos talked about the the challenges chief information officers face when it comes to procuring products and that they often turn to social networks for help. "Ninety percent of CIOs today are making their purchase decisions through social media," she said. Dell is looking to build that kind of socially driven recommendations into their product descriptions. 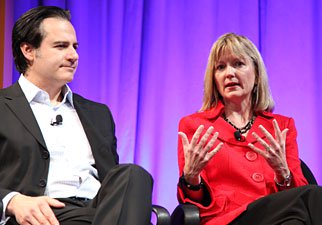 "Working professionals would love to have a company aggregating all the thought leadership about procurement," Ms. Quintos said, throwing out a possible venture for entrepreneurs.

All of these new efforts and shifts into digital media buying underscore what Best Buy's head of North American marketing, Drew Panayiotu, sees as a fundamental question around how companies are having to remake themselves. "Very soon now, you're either going to make a product, or you're going to be a media company," he said. Best Buy's Super Bowl ad featured an array of marketing ploys: pop sensation and Twitter mainstay Justin Bieber tweeted to his followers right after he appeared in the TV commercial, which Mr. Panayiotu cited as an example of how retailers can display their media expertise. "At the end of the day we think there's going to be an amazing amount of new business models that will transform companies into media companies."