What Jaguar Had to Say About Its Portrayal on 'Mad Men'

VP-Brand David Pryor Speaks About Sunday's Night's Salacious Storyline
READ THIS NEXT
The 'Mad Men' Prop Auction: 5 Items You Need At Your Agency

British automaker Jaguar had been enjoying a bit of the limelight -- not to mention free publicity -- over the past several weeks as part of the storyline on AMC's hit advertising drama "Mad Men," as the Sterling Cooper Draper Pryce agency pitched for its first car account. 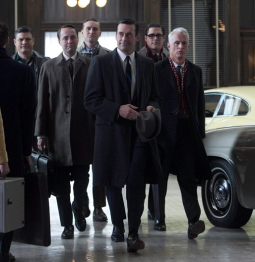 Then David Pryor, VP-brand development for JaguarUSA, watched Sunday night's episode with equal parts shock and amusement as the storyline took a salacious turn: The fictional head of the Jaguar Dealers Association, Herb Rennet, a member of the agency selection committee, tells SCDP's Pete Campbell and Ken Cosgrove in no uncertain terms that he will trade a yes vote in exchange for one night with the curvaceous office manager, Joan Holloway Harris.

In a bit of back-door maneuvering and office politics, if not downright prostitution, Joan agrees to the deal in return for a 5% stake in the company and a junior partnership.

"I'm a big fan of the show and it was gratifying to see our brand portrayed," Mr. Pryor told AdAge.com. Then he added, laughing, "I would say we were fairly surprised at the turn of events."

Mr. Pryor said Jaguar had no control over the script and that he, like everybody else, saw the latest episode when it aired Sunday night. He said that "Mad Men" researchers only reached out to Jaguar's archivist to ask questions about the advertising in the 1960s and what a typical dealership and showroom might look like.

"Obviously it was kind of tainted ... with the storyline," said Mr. Pryor, formerly the chief marketing officer at Porsche North America. "We would agree with Don's position that the best creative should win, not something that was less than above-board. At the end of the day, though, we're confident that people know it's a fictional character."

"Mad Men" character Don Draper tried, too late as it turns out, to convince Joan not to sleep with the Jaguar executive, hoping that SCDP's pitch would make the ultimate difference.

In a bit of fortuitous timing, the automaker in mid-March broke a new campaign with the tagline "How Alive Are You?" from agency Spark44, which is partly owned by Jaguar. The fictional campaign on "Mad Men" presented the Jaguar as a "mistress," with Don suggesting portraying the feeling in the pitch without actually using the word. At one point, the brainstorming session yields the scuttled tagline "Jaguar: The mistress who will do things your wife won't."

In the end, they settled on "Jaguar: At last, something beautiful you can truly own."

"As I watched the show, I was wondering where the pitch was going to go, especially with the whole mistress thing," Mr. Pryor said. "One connection I liked was, they went down this emotional path. They weren't trying to sell the car, they were building on this emotional connection, this love, this lust that people had for the brand back then and that we're trying to recreate now."