With Ascent Comes Complications
READ THIS NEXT
The 'Mad Men' Prop Auction: 5 Items You Need At Your Agency

One of the luxuries of setting a high-end TV drama like "Mad Men" in the 1960s is that you have your choice of meaty and easily recognized themes, from war and racism to politics and sex. But it takes discipline and daring to maintain just one of those themes over 13 episodes, as the show's fifth season did with women's role in business and at home. The transformations hitting the three main female characters -- Joan, Peggy and Megan -- and one minor one, Pete's melancholy paramour Beth Dawes, were both exquisitely depicted and complicated with compromise and contradiction. 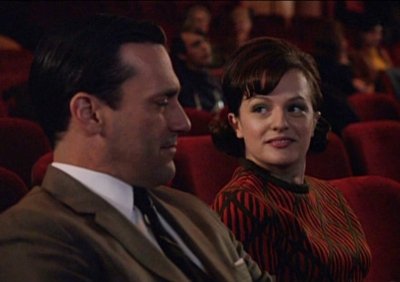 We see Joan, once the office eye candy, assuming the role of the partner with operational conscience, counting the money and searching for new space for the now rapidly growing firm. She only got there by literally whoring herself out for the Jaguar account and, to a smaller degree, through the death of Lane Pryce, a tragedy she thinks she had a hand in by rejecting his advances.

And we see Peggy at her new job, barking at quivering subordinates in Draper-esque fashion and beginning her new assignment: the naming of a forthcoming "ladies' cigarette" from Philip Morris. It's a testament to the show's toughness on its characters that Peggy's biggest assignment will be a product (this is Virginia Slims, which appeared in 1968) that helped introduce countless women to the wonders of nicotine addiction by playing with female independence as a marketing platform. The tagline, you'll remember, was "You've come a long way, baby." The last we see of Peggy, who's quite aware of the tensions between career and family, is looking out the window of her Virginia hotel room to find two dogs humping. Everyone, it seems, is getting some but her.

And we see Megan finally realizing her calling as an actress after ditching a perhaps more-promising ad career. In the finale, her long search for work hits a wine-sodden nadir when she bites on an acting-class scam and then rebounds when she wins work in a shoe commercial made by her husband's agency. She can only get there by screwing over a friend and enlisting Don's help. It's a cheap victory by any measure, but that seems lost on her as we see her ecstatic in a ridiculous get-up for a surely ridiculous ad.

Along the way, she thwarts her mother Marie (played by a wonderful Julia Ormond), who advises her to just shut up and give Don some kids. "You are chasing a phantom," Marie tells her in a startling good bit of acting and writing. "Not every little girl gets to do what they want. The world can't support that many ballerinas."

When Megan protests, Marie finishes her off, snapping, "You are an ungrateful bitch. Thank God my children aren't my whole life."

Marie's mixed message highlights the impossible position for these women. With ascent comes the lowering of expectations and standards, tarred lungs and hanging corpses. And as all this is happening on Madison Ave., in the suburbs there's still misery, as personified by Beth Dawes, the wife of Pete's cretinous commuting buddy. Beth's first appearance was in an episode called "Lady Lazarus," a Sylvia Plath allusion that wasn't easy to interpret in the context of the show. But now it's abundantly clear.

We come to learn in the finale that , like Plath, Beth receives occasional electroshock therapy, a treatment that even in 1967 was being sunsetted as antidepressants began to take center stage. Her latest encounter with the treatment has at least somewhat to do with her brief affair with Pete, which she rekindles for a romp in the Pennsylvania Hotel before having her memory partly erased, including the part with the romp. 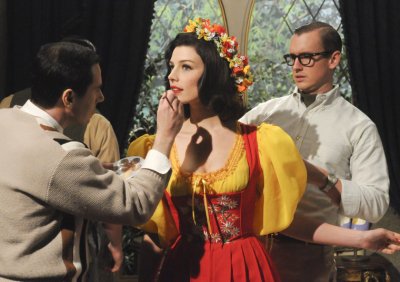 The relationship between Pete and Beth at times felt too lightly drawn, but the finale saved all this for me. Beth, as a victim of mid-century psychiatry and an awful husband, and not just a lust object for an account guy with a bad case of suburban angst, is terribly moving. The scene at her hospital bedside where he confesses his ennui, absent any understanding on her part, is heartrending. In the end, the story arc was less about his deepening despair than her cycles of psychological annihilation at the hands of a drunken lout. As for Pete, who ends up getting in no fewer than three fistfights this season, he ends up where he begins, in Cos Cob contemplating the installation of a swimming pool and listening to his gigantic headphones.

But what about Don and Roger?

If you had told me 14 weeks ago that Roger Sterling would chase away his end-of -career blues with an LSD experience that left him a highly attuned Dionysian, I would have thought you were on acid. As storyline, however, the turned-on Sterling works. His reflections on Pryce's suicide are unusually heartfelt for him. "You'd have to be so sure you're going someplace better, wouldn't you?" he says, in bed with Marie. "I think maybe that place is here." It's even sad that he can't seduce Marie into accompanying him on his next trip. He's left Jane and he doesn't want to go all by himself. In a montage near the end, however, we see him bare-assed and staring out the window with his arms aloft, obviously tripping balls.

A big part of "Mad Men" is about being okay with being alone, as Sterling just might be. Whether Don could say the same remains to be seen. The script leaves it quite literally an open question, as the final line of the season is spoken to him by a young thing who has asked him for a light. "My friend down there, she was wondering... Are you alone?" He just might be.

We've already seen Don watching Megan's screen test , a scene that was reminiscent of the Draper home movies from the season-one Kodak pitch. And we saw how that home worked out. His walk off Megan's stage and into a bar fraught with temptation also suggests a kind of departure -- maybe an end. He orders an Old Fashioned, a cocktail with a meaningful name, in this case.

Whether season six will mark the backsliding of the faithful Don into an amoral cocksman isn't exactly a Who-Shot-J.R. cliffhanger, but I think there's more going here. There have been signs that his conscience is nagging him, suggesting the interiority that once had him sending Frank O'Hara poetry through the mail but hasn't been on display much lately. Who knows what his attempts to make good, by helping Megan with a role or the widow Pryce with a large check, will be worth in the long run? Will they be enough to make up for the lies he's told, to soothe his restlessness?

One of the many phantoms that give the episode its title is a wraith of Adam, Don's -- or rather Dick Whitman's -- brother, who killed himself after he sought out Don and was rejected in the first season. One of his appearances occurs when Don is under anesthesia having a molar removed and Adam, neck bruised by the noose, comes by to crack some gallows humor and observe, "It's not your tooth that 's rotten."

Some will probably complain that the episode was too low-key for a finale. I couldn't disagree more. In the fast-moving previous few episodes, Matthew Weiner and the writers had earned themselves a subtle episode that swam around in the characters' psychological depth, and finished some story arcs while suggesting others. Will Don stay the course? Will Peggy return? Or get married? How will single motherhood affect Joan? Will Sterling remarry? Will Pete, so good at his job, get the respect he deserves? Will his marriage survive? Will Ginsberg wear a clean shirt? Will the agency continue its hot streak and, if so, what will that mean? Another sale, maybe? An IPO? Will "Mad Men" get serious about race and late-1960s youth unrest and address those issues with characters and plotlines that aren't just glancing?

Let's just hope we don't have another 17-month gap before we find out.