When It Comes to Howard Johnson's, Don Draper Is All In
READ THIS NEXT
The 'Mad Men' Prop Auction: 5 Items You Need At Your Agency

Right around the moment a toked-up Peggy manually releases a stranger in a movie theater, it occurred to me that there was something different about last night's "Mad Men." A title like "Far Away Places" promises a journey or two, but the episode's structure itself was an abrupt swerve away from the usual. Instead of interwoven storylines, we got three versions of one 24-hour period in the summer of 1966, told in quick succession with minimal bleeding into each other. 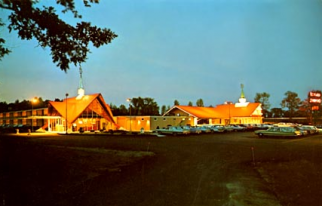 A 1960's postcard view of the Howard Johnson's in Plattsburgh, N.Y.

The action's linchpin is Don's decision to take a spur-of -the-moment trip to check out an upstate New York Howard Johnson's. By rejecting Roger's suggestion that the two go together and by bringing Megan along instead, he sets in motion Sterling's revelatory acid trip and a disastrous client presentation for Peggy. Don's own tale shows further generationally-enhanced cracks in the foundation of his marriage, manifesting in a frustration increasingly fraught with violence.

Peggy's journey covers the least ground of the three. After a gender-bended argument with boyfriend Abe over his unhappy role as booty-call man, she botches a presentation to the Heinz client, who wants more from his bean ads than the creative powers at Sterling Cooper Draper Pryce seem to be able to give. He's begging for a revolution that the agency doesn't quite get, hooked as it is on nostalgia. The Proust-lite sensibility that produced the Glo-Coat winner or Kodak Carousel pitch is not playing well in this summer before the Summer of Love. When Peggy tries to force the matter with a Draperesque client confrontation, she ends up getting fired off the business.

She takes another page out of the Draper playbook and heads to the movies to lick her wounds, for a matinee showing of "Born Free," about a British couple who raise an orphaned lion cub. She ends up getting high with a random dude and, before you know it, there's a quick cut to Peggy meaningfully washing her hands back in the office. Her day finishes with a Michael Ginsberg moment, as the new copywriter obliquely reveals bits of his beginnings as an orphan born in a concentration camp. Still full of pot, she giggles awesomely as he describes himself as a man from Mars.

There are no gateway drugs for Roger Sterling, who heads to a posh high-rise where the mom from "My So-Called Life" is hosting some sort of salon. As if that weren't psychedelic enough, there's a tray full of LSD-soaked sugar cubes to be had. Roger goes unwillingly, brought by his bored and rarely-seen young wife Jane, but ends up getting turned on by turning on.

The trip is wonderfully understated. Instead of melting-wall and talking-furniture cliches, we get musical fanfare bursting from a bottle of vodka and the best Just For Men ad never written. Roger takes a while to become aware of the drug's effect: "Well, Dr. Leary, I find your product boring." Glib humor gives way to clarity as Roger and Jane's journey ends with a decision to get divorced. This particular resolution may be overly pat, but it's also welcome because, well, it's an actual development, something this slow-grinding but still-rewarding season has been short on.

The Drapers' portion of the episode plays out in noir-ish fashion at the Howard Johnson's in Plattsburgh, N.Y.

When Roger proposes a boondoggle of a road trip to Howard Johnson's, Don drags Megan there instead and attempts to force her to share his sentimental appreciation for the place. Though I wouldn't have guessed it, Don is all in when it comes to Howard Johnson's. He's, like, a huge fan. Megan would rather be at work, however, not having orange sherbet forced down her gullet.

After a public fight over said sherbet, Don speeds away without her; when he returns to find only her sunglasses in the parking lot, the threat of violence that 's been painted on earlier episodes this season rises. Don, fretfully and sweatily, drinks coffee and broods and waits, then heads back to New York and finds Megan at home. A chase -- highlighting both the disturbing violence latent in their relationship and the disturbing spaciousness of the Drapers' apartment -- concludes with the couple crashing onto the floor.

It's abundantly clear by now that Don doesn't know what to do with Megan. That young mother figure that led him to propose last season -- alluded to in a flashback -- was an illusion, about as real as Mickey Mouse. The real Megan is modern, career-oriented, no different than Peggy, really, other than the fact that Don is right there in the office to hold her back.

Going to Howard Johnson's is an attempt of sorts to go back to that Disneyland moment, with the branded experience a stand-in for simpler, better times. If Walt Disney's's theme-park strategy was to package a safe, reliable, ready-made vacation experience for the whole family, then Howard Johnson's was packaging eating and lodging on the way to Disneyland -- a clean, well-lit place with 28 flavors of sherbet, a fixed point of safety along the interstates.

In 1966, Howard Johnson's was bigger than McDonald's and the other fast-feeders combined, a zenith before the rising gas prices of the 1970s and about a zillion other cultural factors led to its decline. The Plattsburgh location, now a Ninety Nine restaurant, was meant to be something special too, one of three built in the style of the company's "Concept of 1965" approach, a Technicolor, modernist restaurant built for a high-traffic area. It even had a practice golf course.

As they -- or, rather, as he -- gets down to work, Don mistakes the stop along the way for something grander. "Would you say it's a delightful destination?" he asks, buzzing on HoJo-induced giddiness. But Megan, to whom the sherbet tastes like perfume, will have none of it. "It's not a destination, it's on the way to someplace."

Don, it seems, has finally fixed his feet under him. The cheating wanderer who couldn't commit to Betty is gone -- at least for now. Saying no to Sterling's debauchery this week or prostitutes last, he has now fixed his attention -- but on a moving target . When Megan calls him a "pig" for leaving her behind, she invokes the language of counterculture, of unrest. She has become the protester reacting to the restraints he's placed on her. The Beach Boys' "I Just Wasn't Made For These Times," played during the acid party, might as well have been written for him.

It might all be poignant if Don's reaction to Megan's essential refusal to be what he wants weren't so threatening and so coarse. Instead, the ending is overtaken by irony, as Cooper gives Draper a dressing down for being on "love leave" and Sterling exclaims "I have an announcement to make: It's going to be a beautiful day." But the funereal theme plays under it and, in another structural digression, continues over the credits where a contemporary pop song usually plays.

I can think of only two ways to read this: Either the missing song is a further intentional breakdown in the structure of the show, which mirrors the breakdown of the society it depicts, or Matthew Weiner blew the whole music budget on The Beach Boys track. Either way, it works.