What You Missed on 'Mad Men': Apparitions

Matt Creamer's Recap: Hauling Baggage and Taking Punches
READ THIS NEXT
The 'Mad Men' Prop Auction: 5 Items You Need At Your Agency

In Victorian fiction there were marriage plots that were all about getting the heroine to the altar. In "Mad Men" episodes featuring Peggy Olsen, there are work plots wherein it is predetermined that the the young copywriter will, often at some boy's expense, end up slaving away at some tagline or another. (The exception would be the season one episode where she hits it with Pete Campbell, the perfect synthesis of work and play in Peggy's universe.) 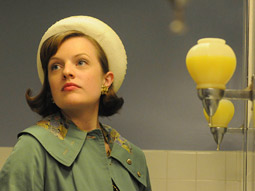 On Sunday's 'Mad Men' episode, we see Peggy's relationship with Don begin to evolve from one based on his mentorship to one in which she is something between wife and mother to him.

On last night's show, Peggy saw a workplace meltdown foil a surprise birthday dinner set up by her boyfriend, who, doofy though he may be, was successful in dragging her mom and sister in from the depths of Brooklyn for the occasion. In her usual workaholic fashion, Peggy ends up a no-show because she's forced to work on a pitch for Samsonite. Blame it on Draper, of course, who's even more of an unhappily soused mess than usual because he has a pretty good idea that Mr. . Dick Whitman, aka Anna, aka the one person who makes Draper happy, has died of cancer.

"Mad Men" does the buddy episode well and this was no exception. We see Peggy's relationship with Don begin to evolve from one based on his mentorship to one in which she is something between wife and mother to him, as a sequence of slapstick events contributed to Draper's further crumbling.

The return of Duck
The historical backdrop to this episode is the second fight between Sonny Liston and Muhammad Ali (then still known as Cassius Clay), whose infamous conclusion saw Clay win in the first round after delivering a phantom punch. That fight turned out not to be the only fisticuffs in this episode, thanks to Duck Phillips. The way-off-the-wagon Duck, who in the episode's early moments tries to woo Peggy with a not-too-bad-but-for-his-involvement idea of creating a woman-focused agency, makes a late-night raid on Sterling Cooper Draper Pryce headquarters with one mission: to take a poop in Draper's office. OK, two missions: He also wants to sleep with Peggy again. He ends up calling her a whore and Draper, fresh from puking after a night of heavy drinking, takes a swing that misses Duck's mug by two feet, and ends up pinned under him.

"I killed 17 men in Okinawa," Duck says, with his knees on the feeble Draper's shoulders.

After falling asleep with Peggy on his office couch, Don wakes briefly to see what must be TV's first branded apparition, as a ghostly Anna walks off into the great beyond clutching a Samsonite suitcase. The next morning he finally makes the dreaded California phone call and it is confirmed that Anna has died, leaving him to weep as Peggy looks on.

But Don does come up with a killer image for Samsonite, based on the famous photo of Clay standing triumphant over a sprawled-out Liston. In Draper's rendition, a piece of Samsonite luggage towers over (presumably) a case from rival brand American Tourister with the copy "The Champ."

A look back at Samsonite
To my mind, the Liston-Clay fight is a lackluster wrap for the episode. Its only real contribution is allowing the pregnant Trudy Campbell to warble the soon-to-be-classic line, "I want a rare steak and I want to see those two men pound each other." Seeing all the rich white people amped up to watch a pair of black men beat each other bloody is, I suppose, a welcome nod to the racial tensions of the era but, like previous references to the Freedom Riders and other Civil Rights moments, it feels a bit heavy-handed.

As historical references go, Samsonite is a richer one. In 1965, the 55-year-old company known as Shwayder Trunk had just changed its name to that of a popular line of suitcases it began manufacturing in the 1960s. In 1964, it posted $56 million in sales and, by the following year, it had a quarter of the market of U.S. luggage. It was also making patio furniture and about 40% of the folding bridge tables purchased in America. As such, Samsonite was a major enabler of the rising middle class.

That success caught the attention of Time and in June of that year (a month after that second Liston-Ali match) the magazine published a piece that highlighted the company's bible-beating roots, its industrial prowess and its retail strategy: "The company requires retailers to sell Samsonite at list prices, but gives them a 40% to 45% markup. Samsonite tells dealers what luggage to buy and how to display and sell it, compensates them if the recommendations prove wrong, and helps them to train the clerks." Time called it the Golden Rule applied to retailers.

At the time of publication, Jesse Shwayder was 83, but "the Biblicist," as the article described him, was still giving advice to his successor, who happened to be his son, who was named ... wait for it ... King David Shwayder. Get it? Samson/King David. (Let me go on record as saying I will be profoundly disappointed if these two don't show up, Conrad Hilton-style, by season's end.)

That same Time article mentions that "Samsonite has been diversifying. It recently opened a new factory in Loveland, Colo. to make children's interlocking construction sets."

Those would have been the colorful little bricks made by Lego, the Swedish company for whom Shwayder Trunk was a North American partner. Samsonite got out of the toy business in the early 1970s and in 1973 it was bought by Beatrice and wouldn't be independent again until a 1995 deal, not long after its then owner bought American Tourister.

Former Ad Age Editor Fred Danzig noticed that one of Peggy's rejected ideas, involving a Samsonite withstanding abuse from an elephant, might have been a sly reference to a real and famous commercial made five years later by Doyle Dane Bernbach for American Tourister: "Her 'toughness' approach turns into 'the gorilla commercial,' showing a caged gorilla -- actually an actor in a $20,000 gorilla suit -- stomping, throwing, smashing and jumping on a Tourister suitcase as a voiceover addresses our 'clumsy, 'brutal,' and 'butterfingered' baggage handlers and concludes with 'Have we got a suitcase for you.'"