E.l.f. never missed a beat during COVID, instead finding its stride
READ THIS NEXT
Ad Age 2022 Marketers of the Year
Credit: ELF via TikTok 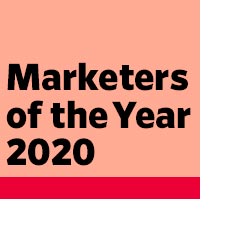 Yet e.l.f. has defied competitors’ steep double-digit declines with growth of 8% and 7% respectively the past two quarters. Part of that was being well positioned. The 16-year-old brand founded in e-commerce still gets most sales that way and had no need to pivot. Most of its other retail distribution is at Target and Walmart stores that never closed. And with an average $5 price for its makeup, e.l.f. was an affordable luxury for anyone wanting to trade down in a recession.

But e.l.f. mainly earned its place among Marketers of the Year through what it did before the pandemic that served it well later—like mastering TikTok—and what it didn’t do once the pandemic started: panic.

Leading the marketing is Kory Marchisotto, a beauty veteran who spent most of her career with Shiseido before she was hired by e.l.f. Chairman-CEO Tarang Amin in February 2019 to lead a marketing “recharge” of a brand that had stumbled in 2018 against an onslaught of influencer-fronted brands.

“We rewrote the brand book, the color codes, the cues, the messaging, the story line,” says Marchisotto. “And we went to market with this incredible campaign. So when COVID hit we were riding this incredible wave of resurgence.”

In October 2019, when competitors were just starting to talk about TikTok, e.l.f. launched its first campaign on the platform built around a 15-second “Eyes Lips Face” song—developed by Movers & Shakers and inspired by Kash Doll’s 2018 hit “Ice Me Out”—to remind people what the brand acronym stands for. E.l.f. has since spawned 10 billion views for its content on the platform.

Related Article
Why tiny e.l.f. is thriving in a pandemic that has seen bigger beauty peers struggle
Jack Neff
How brands can still do influencer marketing during the pandemic
Jack Neff
A regularly updated list tracking marketers’ response to coronavirus
Ad Age Staff

That success drew so much attention from investors that e.l.f.’s stock price took a hit this summer on fears Donald Trump would shut down TikTok. But Marchisotto points out e.l.f. also has a huge presence on Instagram and with influencers broadly. Indeed, the brand started developing its digital prowess in 2004 —the same year Facebook was founded—by selling cosmetics priced at $1 and up online.

“I remember when I was sitting on the other side when e.l.f. came out,” Marchisotto says. “It was an earthquake in the beauty industry.”

The conventional wisdom was that the idea was doomed, she recalls. Of course, that was a decade before an onslaught of digital direct-to-consumer brands made conventional players contemplate their own doom. And E.l.f.’s founding proposition of bringing the best of beauty to every eye, lip and face at reasonable prices still underpins everything it does.

“We’re really powered by a philosophy that anything is elfing possible,” Marchisotto says. Yes, “elfing,” which is just one word in a lexicon of elfisms Marchisotto has been creating for multiple reasons. One, it’s fun. Two, it’s a language customers are helping develop in social media. And, three, it provides alternatives to dropping f-bombs in meetings, which she acknowledges she quickly discovered Amin frowns upon.

E.l.f. speaks a different language from more established competitors in many ways, including its diversity, with an employee base that’s 73% women, 60% millennial and 45% ethnically diverse, she says.

Being based in Oakland, Calif., also helps, says the beauty veteran who spent most of her career in New York. “We act more like a Silicon Valley startup than a traditional beauty company,” she says. “We work at elf speed.”

Again, TikTok was a good example. As the pandemic fueled even faster growth for the platform, e.l.f. was already readying its second campaign.

“I think the important thing for us is that we never thought about it too hard,” Marchisotto says. “Our audience was already there, with a hashtag that had 3.5 million views that we had nothing to do with. So we just plunged in. There are some companies spending six, eight, nine, 18 months writing a strategy. TikTok is a place you just plunge into.”

In another example of not overthinking things, while some competitors scrapped second-quarter innovation programs in the face of the pandemic, e.l.f. didn’t because consumers said not to. “The answer came back resoundingly clear,” Marchisotto says. “Please don’t stop doing what you do best. Your products make us happy.”

E.l.f. did shift to focus more on skincare, which has fared better in the pandemic, Marchisotto says. And with annual sales just north of $300 million, the company is doing something that’s challenged newer d-to-c players – scaling the growth wall that seems to hit around the $200 million to $300 million sales mark.

Part of that is making a transition to a multi-brand company with the acquisition of W3ll People, which Marchisotto describes as “the OG clean skincare brand,” and impending launch of lifestyle brand Keys Soulcare in partnership with Alicia Keys.

“We tripled our brands seemingly overnight during COVID,” Marchisotto says. “It’s an exceptional moment for our company to start building this multi-brand portfolio.”

How Pickleball is drawing fan love and brand dollars