Hearst Shows Advertisers How Hip It Is With Musical.ly Deal | Ad Age
Skip to main content

Hearst Shows Advertisers How Hip It Is With Musical.ly Deal 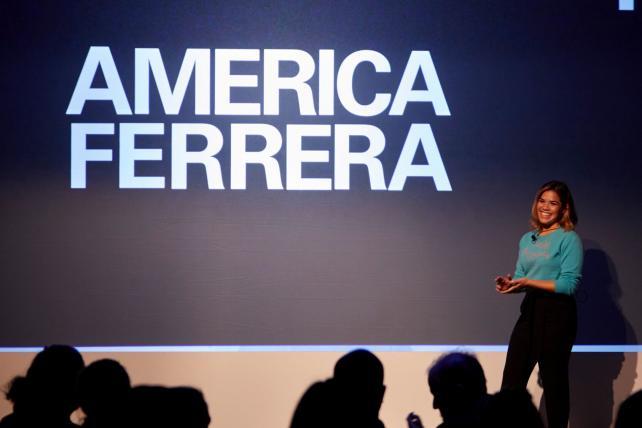 Hearst is now hopping onto the hot, youth-focused Musical.ly, with the first official ad partnership on the mobile singing app.

Hearst announced the partnership at its NewFronts, where it unveiled its digital roadmap for the year ahead to a crowd of ad buyers and business press.

Seventeen magazine is the publication that will create a video series for Musical.ly focusing on beauty and fashion.

It was only a matter of time before the app, introduced in 2014, looked for wider media deals and potential ad dollars. Users post short snippets of pop-infused video filled with lip syncing, music and sound effects. The app says it has 200 million registered users, an obsessed audience that skews toward teen girls.

It's popped up at other NewFronts, including Disney's, but Hearst called its deal the first branded content opportunity for marketers.

"We're in the business of customized content, because we know that is the business you want to be in," said Lee Sosin, senior VP at Hearst Magazines Digital Media, addressing advertisers.

Hearst did not elaborate on whether revenue would be split with Musical.ly or other details of the deal.

The publisher is no stranger to launching new properties on startup apps. It was an original publisher on Snapchat Discover when that app introduced media-curated channels two years ago.

Cosmopolitan is still among the most popular channels on Snapchat, posting daily content, articles, videos, and now original shows.

Amy Odell, editor of Cosmopolitan.com, touted the continuing relationship with Snapchat in the NewFronts presentation.

Odell revealed some new numbers about Cosmo's Snapchat channel, including the stat that it has 11 million subscribers.

Other Hearst publications also have a presence on Snapchat, including Sweet, which was created specifically for that platform.

Snapchat advertisers can place orders for ads from the app itself, losing some control on where messages are placed. Or they can go through the publishing partners. Hearst used its pitch on Wednesday to try to build brand excitement around themed takeovers of its channels, where it can collaborate with advertisers on the content and deliver ads.

"You can buy media from Snapchat, but this is more than just an ad," Odell said of Hearst's offering.

Cosmo also said it would produce its first Snapchat show with 10 episodes, a series called "Keep Calm and Yara On, starring Yara Shahidi from ABC's "Blackish."

America Fererra was also at the event, announcing a new video show to run on three Hearst properties, Cosmo, Elle and Marie Claire.

Ferrera represents some of the more serious work that Hearst was trying to show off -- not just beauty and lifestyle but politics and activism. They will collaborate on digital documentaries and other content.

Like most publishers at this year's NewFronts, Hearst had a story to tell about original journalism in the age of fake news, and it emphasized brand certainty at a time when advertisers are concerned about where their ads run.