For brands, the Super Bowl is the biggest stage there is , but Coca-Cola was eager to take that one step further with its Polar Bowl. 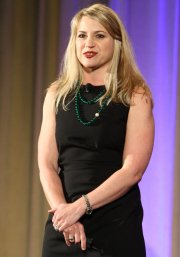 Jennifer Healan, group director-integrated marketing content at Coca-Cola.
The company estimated that 60% of the Super Bowl's 111 million viewers would be using a second screen during the game. "We needed to make sure our idea tapped into that and took advantage of every single screen on game day," said Jennifer Healan, Coca-Cola's group director-integrated marketing content. "But the idea needed to be additive to the experience."

Speaking at Ad Age 's Social Engagement Social TV Conference, Ms. Healan laid out why the company decided to amp up its Super Bowl appearance and discussed the lessons learned along the way.

Coca-Cola's polar bears, typically seen during the holiday season, presented a compelling opportunity -- both as a creative idea for TV ads and as beloved icons that consumers may enjoy engaging with, Ms. Healan said. It was decided that the bears would host their own Super Bowl party, the Polar Bowl, reacting to the game, ads, consumer tweets and Facebook messages in real time. One bear cheered for the New York Giants, while the other supported the New England Patriots.

Coca-Cola worked with Wieden & Kennedy to create and produce the Polar Bowl and the corresponding commercials. New York-based Framestore and Sydney-based Animal Logic helped develop the animations and digital technology.

The experiment was a resounding success, with 9 million consumers across various platforms checking in on what the polar bears were up to. Though Ms. Healan declined to comment on ROI or spending around the Polar Bowl, she offered several data points. Most telling, the company blew through all its available servers, eventually being forced to utilize MLB Advanced Media servers. (The Coca-Cola team was based at MLB Advanced Media during the Super Bowl.)

Ms. Healan said her team had estimated the consumers would spend an average of 2.5 minutes engaging with the Polar Bowl. Instead, they spent an average of 28 minutes. Coca-Cola also saw its Twitter followers grow by 38% during a four-hour period.

One of the keys to success, Ms. Healan said, was the work Coca-Cola did before and after the Super Bowl. Prior to the Big Game, Coca-Cola activated its digital and out-of -home network, ran TV ads and encouraged consumers to RSVP for the event on Facebook. More than 30,000 consumers, 15 times the goal number, registered for the event. After the game, the company provided snippets of video from the Polar Bowl for consumers to tweet and share.

While it's not clear whether the polar bears will make another appearance at Super Bowl 2013, Ms. Healan said the experiment is "redefining" marketing at the company. "It's a conversation, not a monologue," that Coca-Cola needs to have with consumers, she said.