A Cowboys-Patriots Super Bowl Would Level Every TV Ratings Record

Plus: Complete Super Bowl TV Ratings, 1967 to 2016
READ THIS NEXT
Mars Wrigley will return to the Super Bowl with a 2021 ad buy 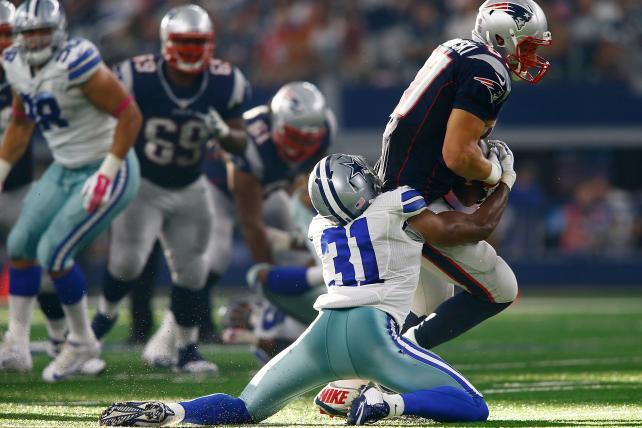 The Patriots' Rob Gronkowski is tackled by the Cowboy's Byron Jones at AT&T Stadium on Oct. 11, 2015 in Arlington, Texas.
Credit: Mike Stone/Getty Images

While it's a bit premature to start tallying the proverbial hatchlings, the prospect of a Patriots-Cowboys Super Bowl has Fox and NFL execs alike indulging in the sort of end zone theatrics that would earn a wide receiver a $12,000 fine and a 15-yard penalty. A Feb. 5 meet-up between the league's two biggest TV draws -- and, depending on how much stock you put in sentiment polling, the two most roundly loathed NFL franchises -- would all but certainly shatter every extant TV ratings record while driving the price of Fox's last-minute scatter inventory up into the nosebleed seats.

Vegas oddsmakers have the Pats listed as their prohibitive favorite to suit up for Super Bowl LI, booking them at 3-to-1 on the money line. Dallas is a 4-to-1 favorite; the nearest runner-up is Seattle at 13-to-2. Should the number crunchers on the Strip prove to be correct in their calculations, the advertisers who are investing some $5 million for each 30-second increment of in-game airtime can expect to get a whole lot of bang for their buck. Barring an unlikely blowout or nationwide power outage, a Pats-Cowboys title tilt would be a lock to beat the ratings record set by New England and Seattle in 2015's Super Bowl XLIX.

The Cowboys are the antidote for the NFL's season-long ratings malaise, averaging a jaw-dropping 24.9 million viewers and a 14.6 household rating to date in their nine national windows. (Dallas last night appeared in its tenth national window in a "Sunday Night Football" battle with the New York Giants. Ratings for the NBC broadcast were not available at press time.)

Just ask Fox about the power of a winning Dallas squad; thanks in large part to a schedule that saw the Cowboys featuring in five of its nine slated national windows, the network has bragging rights to the only coast-to-coast NFL package that is attracting more viewers than it did a year ago. (By way of contrast, the aggregate deliveries for the other two national Sunday windows are down 13% compared to the year-ago period.)

In terms of household ratings, New England currently is the NFL's No. 2 TV draw, averaging a 12.3 rating over the course of its four national windows. The Pittsburgh Steelers, another team with an outsized national following that is buttressed by an even more rabid contingent of hate-watchers, is presently edging the Pats in total deliveries, averaging 21.4 million viewers in its seven national windows to Brady and Belichick's 21.2 million.

Wherever you happen to stand on the Cowboys-Pats continuum -- you either buy into the marketing hoo-ah that is Dallas' self-coronation as "America's Team!" and believe that the Pats are the dirtiest cheaters this side of Lance Armstrong, or you think Tom Brady's matinee-idol mug belongs on Mt. Everest and Jerry Jones is basically Emperor Palpatine with a $1.3 billion stadium and a penchant for poorly-executed plastic surgery OR you hate both teams so much it gives you hemiplegic migraine -- it's hard to see any downside to this hypothetical Super Bowl pairing. If nothing else, it would prove to be one of those rare occasions in which the two very best teams square off for the right to hoist the Lombardi Trophy.

And should it never come to pass and we get stuck with, say, a reprise of the ghastly, one-sided Seahawks-Broncos snoozer from three years ago? There are worse things that could happen. After all, with an average draw of 112.2 million viewers, that 43-8 Jersey curb-stomping still stands as the No. 2 most-watched TV broadcast in U.S. history.

However things shake out in February, what follows is a graphic, interactive depiction of how Super Sunday has evolved from a low-stakes experiment (the man who hauled in the first Super Bowl touchdown pass was so hungover he couldn't locate his helmet) to the great secular holiday/marketing extravaganza that it is today. You'll also find a series of bullet-points we've unearthed about the Big Game, a compendium of trivia on everything from the goofiest halftime shows to the most forgettable lead-out programming. We've got your rundown of historical Super Bowl ad prices right here.

Super Bowl TV Ratings, 1967-2016
Total average delivery
Household Ratings
See the full table
*2006-16 data is culled from Nielsen live + same day measurements; all other years reflect live viewing.
Note: Super Bowl I aired simultaneously on CBS & NBC. This game is the only Super Bowl to have been broadcast in the US by two TV networks simultaneously. At the time, CBS held the rights to nationally televise all NFL games while NBC was the AFL rights holder.