Why P&G's Tide Ditched Its Super Bowl Ad For ... Twitter?

Besides Being Cheaper, Tactic Drew Millions of Eyeballs
READ THIS NEXT
Super Bowl LVI is 85% sold out of commercial time

Procter & Gamble Co.'s Tide saved $4 million on a spot in this year's Super Bowl and instead spent the game on Twitter talking about other people's ads.

In all, Tide created 22 Vines and related tweets with joking plays on other brands' ads, all involving messes that Tide could clean up and bearing the #GetsItOut hashtag. That generated 3.6 million impressions via thousands of retweets, according to spokeswoman Anne Candido. 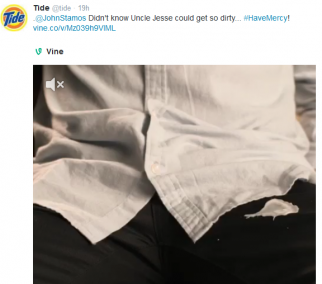 Among Tide's tweets, this double-entendre to John Stamos, actor in an Oikos yogurt ad

The audience was a far cry from the 111.5-million for TV's most-watched TV event ever, per Nielsen, or the 525 million impressions that social-media agency 360i claims from last year's famous Oreo Blackout tweet during the Super Bowl.

While Tide didn't buy a TV ad, it did pay for Promoted Tweets, Ms.Candido said.

But Tide is happy with the results anyway. The brand put out a little over two minutes of video for what was obviously way less in production costs than last year's 60-second "Miracle Stain" ad, which, among other things, required payment to former San Francisco 49ers quarterback Joe Montana for using his likeness as a stain.

In all, 10 to 20 people were involved in Tide's tweet-fest, including at virtual "newsrooms" in Cincinnati, Boston and New York, the latter two home to digital shop Digitas, PR shop Devries and creative agency of record Saatchi & Saatchi. It was "real time marketing" in a sense, though prepared days in advance with time for P&G's legal department to vet all the Vines thanks to so many ads or teasers having been released before the game.

Tide felt it got "a lot of great engagement," Ms. Candido said, including some people who said "we 'owned' social media for the Super Bowl."

High-fives to all the girl geniuses and the messes they make. @Tide @goldieblox @intuit #GetsItOut #SB48 https://t.co/K28sMOgx0k

Some of those were marketers or agency people, as Tide was the most-pronounced example of marketers talking to each other on Twitter during the Super Bowl this year. Other examples were General Mills' Cheerios praising an ad from Unilever's Axe, and Kia asking JCPenney, "Need a designated driver?" when the latter was putting out garbled messages – which later turned out to be a stunt about tweeting with mittens.

"I think this Super Bowl is the first time I've seen that happening in full force," Ms. Candido said. "I think it's because social is just that, and that gives you some liberties to engage brands, especially non-competitive ones in a way that might benefit both." While much of it was marketers talking to marketers, she said many regular consumers got in on the conversation, too.

But did it sell soap?

Ms. Candido said it's "too early to tell for the Super Bowl." But she added that history shows, "we win as a brand" by engaging consumers with "authentic brand content at a relevant time."

Puppies and horses @Budweiser? Adorable, or just a giant mess for @Tide to clean up. #GetsItOut #SB48 https://t.co/AaP8ZwpqJa