USA Today is expanding its annual Super Bowl Ad Meter program to include more voters and more commercials, with a plan to bring its scrutiny of commercials to TV events next year beyond the big game. But it is doing away with the longstanding in-person panels in an attempt to bring in more voters online, and is also discontinuing its brief Ad Meter collaboration with Facebook. 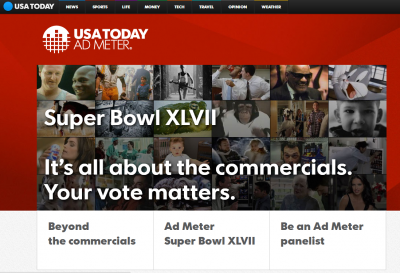 USA Today is replacing its in-person panels with online voting.

The paper's Super Bowl Ad meter, which dates back to 1989, has become a controversial but widely observed readout of high-stakes success or failure. In 2007 CareerBuilder put its account up for review one day after its Super Bowl spot failed to crack the Ad Meter's top 10; Cramer-Krasselt promptly resigned in protest. Critics argue that the Ad Meter results reveal more about entertaining viewers on game day than selling products or services.

"There's an ongoing debate, and there always will be, in the advertising world about the beautiful ad or the effective one," said Larry Kramer, who was named president and publisher of USA Today in May. "Everyone accuses the ad industry of doing beautiful ads for themselves and not selling widgets. This is something in between: It won't tell you whether it will sell new widgets, which you'll get soon enough, but it doesn't tell you what the industry thinks, which might reflect how hard it was to do and things like that . This represents the view of consumers, who don't care what went into pulling it off. So you can really see if it accomplished at least part of the goal, which is to engage potential customers."

To expand the Ad Meter's reach and perhaps better inform its results, USA Today for the first time is inviting consumers to sign up to vote online through a password-protected microsite. The online voting can accommodate as many voters as want to participate, wherever they're located in the country. Last year, by comparison, USA Today's Ad Meter comprised roughly 300 voters situated at two locations.

The Ad Meter has allowed people to vote commercials up or down online in the past, including last year with its Facebook effort, but digital voting has not previously counted toward the "official" result. 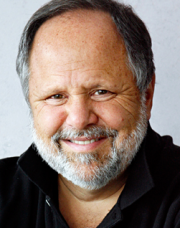 In other measures, USA Today is adding halftime commercials to the Ad Meter's purview. Its previous restriction to in-game ads meant last year's panel did not vote on spots including Chrysler's "Halftime in America" starring Clint Eastwood. Subsequent public discussion of that commercial (which included a series of "Saturday Night Live" spoofs) was part of the motivation to consider halftime ads, a spokeswoman said.

USA Today is also building a bigger digital hub by adding past rankings, posting new teasers and commercials as they are released before the game, and tracking social chatter related to the ads.

It decided not to repeat the Facebook partnership partly because it plans to expand the Ad Meter and related elements beyond the Super Bowl, Mr. Kramer said. "We want to do this ourselves because we're going to do a lot of these," he said. "We need to build the apparatus ourselves do we'd own it."

"Look, Facebook is great and we like working with them, but if you look at this organization today top to bottom vs. a year ago, we're a lot more digital," he said. "And we need to build that internally."

Asked whether other sports championships or events such as the Oscars could really sustain comprehensive voting on the commercials, which aren't created specifically for those broadcasts the way they are for the Super Bowl, Mr. Kramer suggested that the Ad Meter might help anchor programs in the nascent social TV space.

"The Oscars may be hard to do right away," he said. "And the Oscars may be about a broader experience than just the ads. The ads are part of it and the Ad Meter platform will be part of it, but each of these things will have their own attributes."

"On an Oscars one we might let people use an app to vote on who's got the hottest dresses on the red carpet," he added. "We can do all kinds of cool things that really enhance something people already want to do."