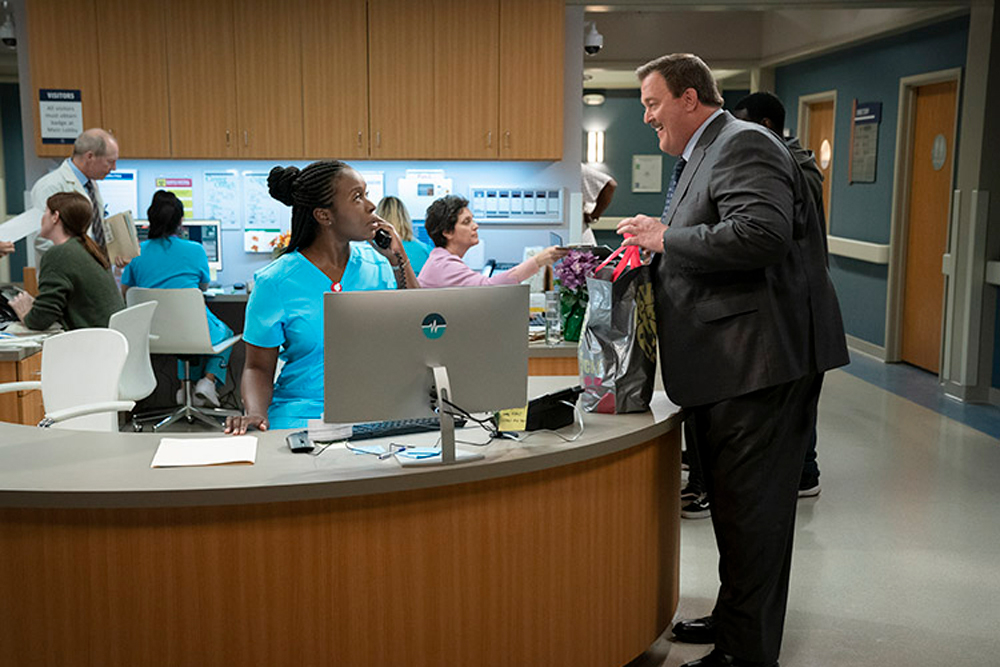 In its first upfront in recent memory without (former CEO) Leslie Moonves at the helm and sans “The Big Bang Theory,” the eye network announced that it’s adding eight new shows to its 2019-2020 primetime schedule.

But the biggest focus during the eye network’s annual press breakfast was the decision to renew “Bull” despite the controversy surrounding its lead actor Michael Weatherly. In December, The New York Times reported that CBS paid actress Eliza Dushku $9.5 million to settle her claim that she was sexually harassed by Weatherly. And just last week Steven Spielberg’s production company said it was cutting ties with the series.

“Michael made a mistake in his comment. He owned that mistake, he was apologetic at the time [of the incident] and he was remorseful... and he apologized again when it came out,” Kahl said. “We looked at this work in totality for the last 14 years. There had never been a complaint before about [his behavior] and there hasn’t been one since. He’s a dad, a father—he’s upset by this and he wants to do better.”

“He made a mistake, he admitted to that mistake, and I believe he was honest in his remorse,” Kahl continued. “And I believe people can make a mistake and recover from that.”

Kahl said that the network will have a team of HR professionals visiting all of the sets of its series on a regular basis.

“There is no room to sweep anything under the rug,” Kahl said. “Commitment to culture is a big, big deal for this company.”

The biggest change to CBS's schedule comes to Thursday night, currently the home of “The Big Bang Theory,” which will air its final episode this week.

“Young Sheldon” will now anchor the night and serve as a lead-in for the new single-camera comedy “The Unicorn,” about a group of friends and family who help a man embrace his new normal since the death of his wife a year ago.

“Mom” returns to 9 p.m. and is followed by “Carol’s Second Act,” starring Patricia Heaton as a woman who, after getting a divorce, raising children and retiring from teaching, pursues her dream of becoming a doctor. At 10 p.m. is “Evil,” a new psychological mystery from producers Michelle and Robert King.

“The Neighborhood” once again kicks off Monday nights and is paired with the new Chuck Lorre comedy “Bob Hearts Abishola,” starring Billy Gardell of “Mike & Molly.” At 9 p.m. is the new courthouse drama “All Rise,” and “Bull” remains at 10 p.m.

Fridays and Sundays also remain intact from this season. “Madam Secretary” will return on Sunday nights for its final season.

New mid-season series include “FBI: Most Wanted” from Dick Wolf; “Tommy,” starring Edie Falco as a former high-ranking NYPD officer who becomes the first female chief of police for Los Angeles; and the comedy “Broke,” starring Pauley Perrette as a single suburban mother whose estranged sister and her wealthy husband move in with her after they lose all of their money.

“MacGyver,” “Man with a Plan” and “Criminal Minds” are also being held for mid-season.

On the cancellation of the highly-anticipated reboot of “Murphy Brown" and the future of reboots, Kahl said, “We’re not actively going out there looking for them, but if something were to come up....”

Kahl acknowledged the first development season without Moonves was “different.” “I can’t pretend it wasn’t different, but we’ve had a team that’s been in place for a very long time. Leslie was a strong leader and he definitely had an influence over what we [picked up], but it wasn’t always ruling by fiat.”