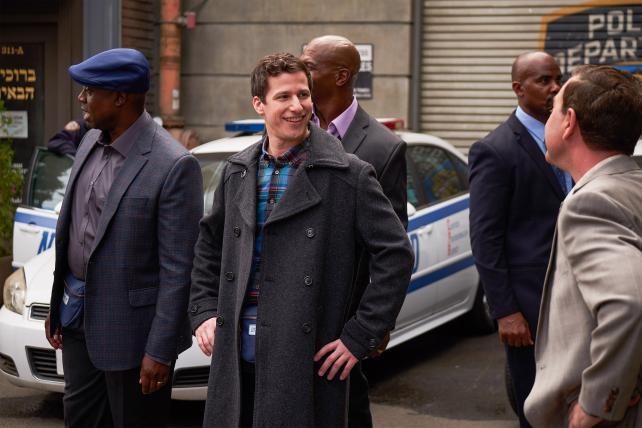 NBC is dedicating a night to Dick Wolf in the 2018-19 season and will lean on reality programming next spring.

The peacock picked up five new dramas and two new comedies for next season, with NBC Entertainment Chairman Robert Greenblatt once again emphasizing the stability of the network and the importance of its year-round schedule during a press call on Sunday.

But perhaps the biggest news for NBC is its move to "save" "Brooklyn Nine-Nine" after it was cancelled last week by Fox.

The decision to bring back the comedy, which is produced by Universal Television, for a 13-episode sixth season was an easy one for NBC.

"It is a show very close to us," Greenblatt said. "We've been watching it closely and I have been saying to certain people if I knew Andy Samberg was going to be casted, it wouldn't have been sold to Fox. It was a missed opportunity."

"It fits into our brand of comedy in many ways better than it ever fit into Fox," he added.

Greenblatt is hopeful the show can go for "several more years," but stressed it is too early to tell. Not only does NBC parent Comcast own "Brooklyn Nine-Nine," he said, but it has robust international numbers and syndication potential.

"Brooklyn Nine-Nine" will air midseason, but Greenblatt said the network has not figured out exactly where it will land on the schedule.

Greenblatt also addressed rumors of a reboot of "The Office." "I don't want to be coy… but it is probably best if I don't talk about it," he said.

NBC will use "The Voice" on Monday night as a lead-in to "Manifest," a mystery thriller about a missing plane. It will be worth watching to see if the reality singing competition, which is still a strong contender in the time slot, can be used to introduce the new series. It failed this year in helping to drive viewership to "The Brave," which was ultimately killed after its freshman run.

"This Is Us" will return to Tuesday nights for its third season, along with the results show of "The Voice." They are joined by the new medical drama "New Amsterdam."

Wednesdays will be all about Dick Wolf, with "Chicago Med," "Chicago Fire" and "Chicago P.D." airing back-to-back in the fall.

While NBC has "flirted with doing this in the past," Greenblatt said its internal research shows there is strength in lining up those shows.

With Thursday Night Football no longer taking up part of its fall schedule, NBC will use the night as home to its comedies. "Superstore" kicks off the night, followed by "The Good Place" and "Will & Grace" at 9 p.m. Added to the lineup is the new comedy "I Feel Bad," which boasts Amy Poehler as an executive producer, about the side effects of a woman trying to have it all. "Law & Order: SVU" rounds out the night at 10 p.m.

"Usually January and February are periods for us where we do some treading water while 'The Voice' is off between fall and spring and this year I am really thrilled about what we put together driven by unscripted shows," Greenblatt said.

This includes an "America's Got Talent" spinoff that will air in January; "Ellen's Game of Games" on Tuesdays at 8 p.m. and a new unscripted competition series from Dwayne Johnson on Wednesday nights. "The World of Dance," which returns for its second season in a few weeks, will move to Sundays in the spring.

Other midseason additions include the spy-hunting thriller "The Enemy Within;" "The InBetween," about a woman who can communicate with the dead; and "The Village," an ensemble drama set in a Brooklyn apartment.

There's also the new multi-camera comedy "Abby's," which is described as the first sitcom to be show outdoors in front of a live audience.

NBC is once again on track to end the season as the No. 1 broadcaster in both total viewers and the key 18-49 demographic that to the Super Bowl and the Olympics. The peacock is averaging 9.1 million viewers and a 2.2 rating.

It pulled the plug on comedies "Great News," musical drama "Rise," "Taken" and "The Brave."

NBC lost its entertainment president Jennifer Salke, who left to lead Amazon Studios, in February in the midst of development season. Greenblatt said the transition has been smooth and it has been business as usual.