Upfronts: NBC Revives 'Will and Grace,' Must See TV Tagline 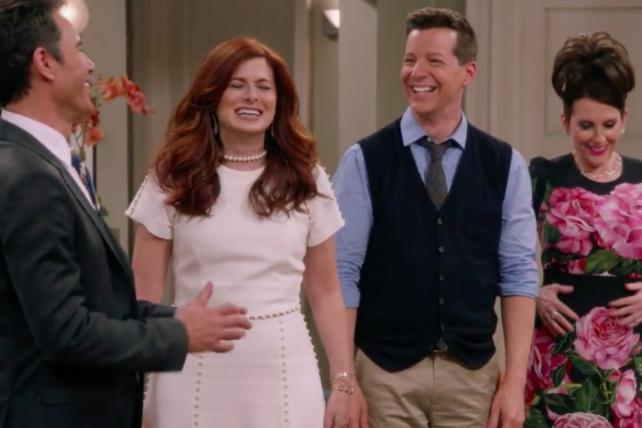 A scene from an NBC teaser video for the return of 'Will & Grace.'
Credit: NBC Universal

NBC is trying to bring Must See TV back to Thursday nights with "Will and Grace" and "This is Us."

"Will and Grace," which has been off the air for over a decade, will return for 12 episodes, including a one-hour Christmas special, and kick off the night at 8 p.m. next season, the network said Sunday as it announced its new lineup.

But even that won't necessarily spell the end of Will, Grace, Jack and Karen. "If this works we are going to want more," said Robert Greenblatt, chairman, NBC Entertainment.

NBC will also move TV's biggest freshman hit, "This is Us," to 9 p.m. on Thursdays. The tear-jerker drama will also air a special episode following Super Bowl LII.

NBC'S Thursday night schedule will be pre-empted six weeks into the season for "Thursday Night Football," return in January and take another break during the Olympics.

Greenblatt said there are several ideas in the works to keep "This Is Us" alive during its time off. The network may try a "This Is Us" Christmas special that would air during the football break.

Tina Fey's "Great News," which returns for a second season, and Dick Wolf's new "Law & Order True Crime: The Menendez Murders" will round out the night.

NBC will reprise its "Must See TV" branding for a new generation of viewers, as well as those who watched some of its biggest hits like "Friends."

"This is as close to must-see TV as we ever had in our history," Greenblatt said.

There won't be a lot of newness on NBC's fall schedule. The Peacock will add five new dramas and three new comedies over the course of the 2017-18 season, but the majority will be held for the second half.

Greenblatt said the overall order for new series is down. "Two years ago we probably made 20 or 22 pilots; this year we made 12," he said. "We did that very strategically ahead of time."

NBC will end the season as the most-watched broadcaster in the key 18-to-49 demo, averaging a 2.1 rating. This is the third time in four years that NBC has ended the season No. 1 in the demo.

"We picked up fewer shows than we have in the past," Greenblatt added. "We picked up more returning shows because they are good. We didn't want to just throw them out the door for new shows."

"The Brave," a drama about America's elite undercover military heroes starring Anne Heche, earns the most coveted spot on NBC's schedule, airing after "The Voice" on Monday nights in the fall.

Last year that spot went to the time-travel drama "Timeless." After initially canceling the series, NBC reversed course over the weekend and decided to renew it for a second season.

Despite airing after the popular "Voice," "Timeless" spent most of the season struggling. The timeslot previously helped make "The Blacklist" one of NBC's biggest series. With an average upfront cost of around $190,000 for each 30-second sliver of airtime, "Timeless" was the second-priciest 10 p.m. show on the fall schedule.

NBC did not say when "Timeless" will return.

"The Voice" returns next season to Monday nights at 8 p.m., with the results show airing on Tuesdays at 8 p.m. Ahead of the return of "American Idol" to TV next season, this time on ABC instead of Fox, NBC locked up two former "Idol" contestants to serve as "Voice" judges. Jennifer Hudson will join the singing competition in the fall, while Kelly Clarkson will take one of the seats in the spring.

Comedies "Superstore" and "The Good Place" move to Tuesdays following "The Voice" from Thursday nights. "Chicago Fire" will remain in the 10 p.m. timeslot, one of the few strengths in the 10 p.m. hour across broadcast TV.

"The Blacklist" will move to Wednesday night at 8 p.m. joining "Law & Order: SVU" and "Chicago P.D."

Friday nights will be dedicated to dramas, with "The Blindspot" moving to 8 p.m. Fridays from Monday nights. It will be followed by "Taken" and "Dateline NBC."

Once "Sunday Night Football" runs its course, the network will turn over the time to "Little Big Shots," "Ellen's Game of Games" and Jennifer Lopez's "Shades of Blue."

New dramas joining the lineup midseason include "Rise," about a dedicated high school teacher who takes over the school's lackluster theater department; "Good Girls," a mix of "Thelma & Louise" and "Breaking Bad"; and "Reverie," about a college professor trying to save ordinary people who have lost themselves in a virtual-reality program.

New comedies include "A.P. Bio," about an Advanced Placement biology teacher who makes it clear he won't be teaching biology; and "Champions," about a gym owner with no ambition who finds out he has a teenage son.