Univision Upfront Opens With Sofia and Closes With Shakira

Univision Communications kicked off a lively, aggressive upfront presentation with Sofia Vergara dancing onstage with David Lawenda, president-advertising sales and marketing, and ended with a song from Shakira. In between, Univision hammered its "Latinos Live Here" message.

Ms. Vergara, who is Colombian and began her career at Univision before landing her role on ABC's "Modern Family," said: "I might work somewhere else, but this is where I live. Univision."

Mr. Lawenda emphasized that Univision has a 73% share of Spanish-language TV viewing and that 94% of its programming is viewed live and is therefore DVR-proof. Nearly one-third of Hispanics are millennials, he added. "Our audience is an entire generation younger," he said, in one of the frequent digs at English-language networks and their aging, declining viewership. 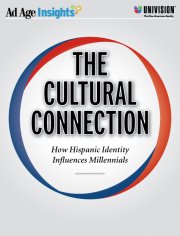 That didn't stop Univision from taking the major step of partnering recently with ABC News to create an English-language news channel to reach increasingly bilingual and English-speaking Hispanics.

At its presentation at the New Amsterdam Theater, Univision launched UVideos, a digital network aggregating programming from Univision's 12 networks.

Univision is also adding three web novelas, and the usual slate of future-blockbuster telenovelas, including one about a veterinarian who falls for a man on the run, and a macho guy who can win back the woman he tricked in a business deal only by disguising himself as a woman named Eva.