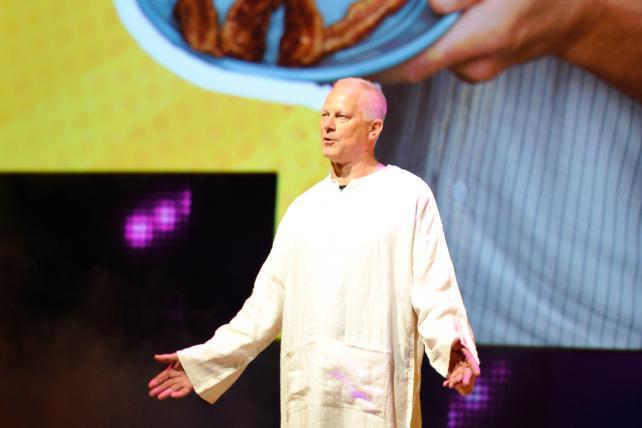 ESPN had a number of objectives in mind as it hammered out its 2018-19 upfront presentation, its first major sales pitch since the departure of John Skipper. Not only did the network seek to use the big show to introduce its new president, Jimmy Pitaro, but it also looked to pound the singular advantages of buying inventory in live sports, while leaving enough time to allow Kenny Mayne to launch into his annual goof on the state of the advertising industry.

A master of the art of projecting an aura of nonchalance that forever threatens to mutate into complete indifference, the puckish Mayne usurped Pitaro's big introduction, wandering out onto the stage at Broadway's Minskoff Theatre as the new president was given his cue to greet the crowd of advertisers.

"All the money deals run through me now," Mayne announced, before rattling off some of the highlights of his résumé to the disbelieving crowd. "You don't think I can handle this responsibility? I went to Wenatchee Valley Community College! I went to UNLV, which is sort of the Harvard of the west."

About 20 minutes after Mayne ceded the spotlight to his boss (more on that in a bit), the veteran ESPN anchor reappeared onstage clad in a white tunic, as if he were on his way to the nearest ashram. "Look, I'm as tired of doing this as you are coming here," Mayne said, before grumbling about how the powers that be in corporate no longer appreciate the work he puts in each year for the upfronts show. "Last year, I flew into this fucking place on fishing line," Mayne groused. "I risk my life for this company and they no longer send me the Disney Silver Passes."

Mayne's 10-minute bit (he writes his own material) included a halfhearted stab at hot yoga that gave way to a sort of freeform cardio class, potshots at rival networks ("Fewer ads for 70 percent more money is a good idea—at least that's what NBC said") and gnomic pronouncements about the future and the immediate present. "We're just ordinary people sitting in a room where a lion dies," Mayne mused, referring to longtime Minskoff tenant "The Lion King."

The routine ended on a martial note, as a pair of cannons blasted the crowd with a shower of "Kenny Bucks," ESPN-speak for a bunch of faux-greenbacks that had Mayne's face inked into the oval normally reserved for the stern visage of a dead president. 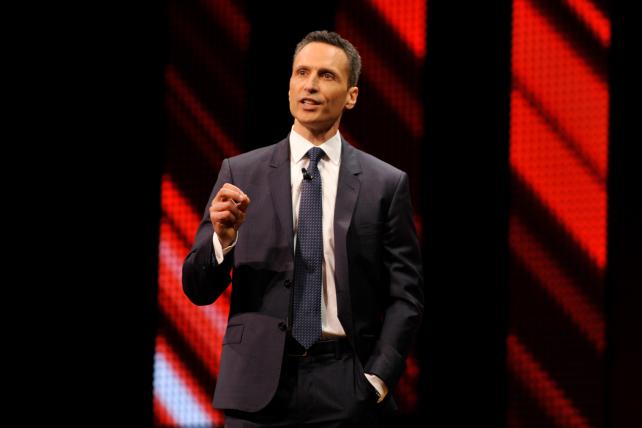 As one may well imagine, Pitaro wasn't there to workshop a crisp five-minute set. In his introduction to ESPN's client roster, the 48-year-old New Yorker cut a much more polished figure than the folksy, bookish Skipper. Handpicked by Disney CEO Bob Iger to lead ESPN into the largely unchartered digital future, Pitaro worked as the Mouse House's chairman of consumer products and interactive media before accepting the top job at the sports-media colossus in March.

"Before I took the job here, I was already a lifelong fan," Pitaro told the assembled buyers and advertisers. "I had a personal relationship with this company for many years." Pitaro went on to boast about ESPN's unrivaled "combination of strengths," before adding that Bristol is not at all interested in resting on its laurels. "We're at the beginning of the most exciting chapter in our amazing story. There is so much momentum at ESPN right now."

Much of that momentum has to do with ESPN's vast store of live sports programming, which Senior VP for Sales and Marketing Wendell Scott called content that practically invites commercial deliveries. "There's been a lot of bluster out there about the reduction of advertising in primetime," Scott said in a nod to the usual suspects at NBC and Fox. "It's a problem created by the same people who say they can fix it. If you want to talk attention, look no further than ESPN."

Scott went on to add that the immediacy of live sports makes ESPN one of the most sound investments an advertiser can make in an increasingly volatile everything-on-demand TV landscape. "As the market talks about C3, C7, or even C35, at ESPN we know that within five minutes of when your message airs, 98 percent of our audience sees it," Scott said. "Who else has C-5 minutes?"

The huge advantage of airing DVR-proof live sports has been underscored throughout this year's NBA playoffs ratings, which through the first two rounds are up 2 percent compared to last season's already impressive numbers. The NBA is so hot at the moment that it practically dominated ESPN's upfront presentation; along with an appearance from former Lakers legend Kobe Bryant, who talked up his new ESPN+ hoops analysis show "Detail," the presentation featured a segment on the upcoming documentary "Basketball: A Love Story" and a 10-part series on the rise and absolute dominance of Michael Jordan and the Chicago Bulls called "The Last Dance," to debut on ESPN and Netflix in 2019.

Naturally, ESPN also had time to hype up the red-hot Major League Baseball season (the reignited Yankees-Red Sox rivalry has already sent ratings soaring at the regional and national levels) and its close affiliation with the NFL. To that end, the network trotted out Dallas Cowboys owner Jerry Jones, who oddly enough was not greeted with a chorus of boos from the New York ad crowd, and the new "Monday Night Football" broadcast team. Joe Tessitore, Jason Witten, Booger McFarland and Lisa Salters will call their first regular-season game on Sept. 10, when the Jets kick off the season in Detroit.

For the most part, ESPN didn't bury its audience under a mountain of statistics, but when stats were incorporated into the morning pitch, they generally made an impact. Having been the first network to transact against out-of-home deliveries, ESPN offered up a few numbers that suggested that commercials viewed in bars, restaurants, gyms and other public venues were recalled nearly as much as ads viewed via the home TV set. Citing a six-month study by Nielsen and Phoenix Brand Effect, ESPN noted that, compared to in-home viewers, out-of-home viewers were 91 percent as likely to recall the content of an ad 24 hours after exposure.

And perhaps no stat cited during the hour-long event spoke to the opportunities that lie ahead quite like the final data point issued by Ed Erhardt, ESPN's president of global sales and marketing. "Nearly 12 percent of our total impressions now come from streaming and out-of-home," Erhardt said. "ESPN's live audience is the most elusive and valuable in all of media and we have it for you, with scale. In a landscape where results matter more than ever, there is simply no room for second place. With ESPN, you can be first."