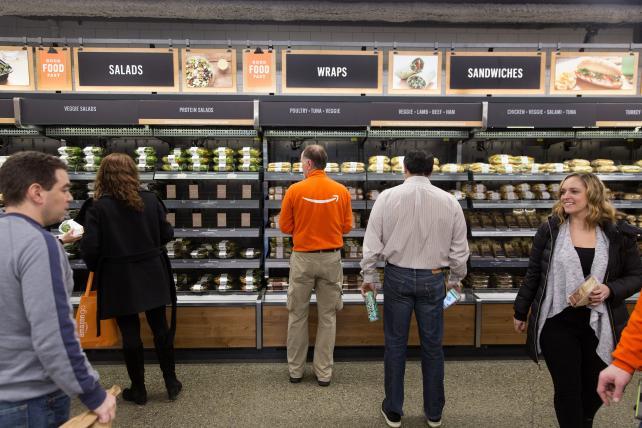 Mighty AI spent much of its first five years building software that helps self-driving cars recognize real-world objects. The Seattle startup went so far as to open a Detroit office to cozy up to the auto industry.

Then last February, Mighty AI's sales team received an unusual request: Instead of identifying pedestrians and cars, could they track items plucked from store shelves by shoppers? A few months later, Mighty AI signed a deal to do just that, joining the race to help brick-and-mortar retailers keep pace with Amazon.com Inc.

A year ago, the e-commerce giant opened a cashierless convenience store called Amazon Go, marking its biggest effort yet to change the way people shop in the physical world. Today a fleet of companies are working to replicate elements of Go or invent other ways of streamlining store operations.

Many are startups like Mighty AI, but established giants are wading in, too. Walmart has been testing Go-style technology, and Kroger and Microsoft recently announced a joint venture to bring elements of the e-commerce shopping experience to the grocery store.

Mighty AI chief executive Daryn Nakhuda says Amazon Go showed "how far you can go." Very quickly, he says, the state-of-the-art went from you-scan checkout technology to Amazon's 'just walk out' approach and everything in between.

Amazon, which today operates nine Go stores in three cities, has announced no plans to sell the proprietary technology to other retailers. And even if the Seattle leviathan did offer to license the system, fierce competition with other retailers would probably preclude most partnerships.

"What we are seeing is Silicon Valley at large, venture capital at large, trying to come up with some solutions" to sell to retailers, says Steve Sarracino, founder of Activant Capital, a Greenwich, Connecticut, investment firm that has stakes in retail technology startups. "There will be a huge market" for other technology firms to capitalize on, he says.

That was on display at the National Retail Foundation's trade show in New York last week, where one such hopeful showed off a blue shipping-container sized experiment called the NanoStore.

Built by AiFi, a Santa Clara, California, startup, the 160-square-foot store's limited inventory put it somewhere between a vending machine and small convenience store. Like Amazon Go, it was packed with cameras and shelf sensors that track customers as they browse and pick up items. On the way out, shoppers tap an app or swipe a credit card to pay.

AiFi's chief executive officer Steve Gu says his company is following a similar technological route as Amazon but favors more automation. While Go is staffed by clerks stocking shelves and assisting customers, AiFi's prototype is designed to be completely autonomous in its day-to-day operation.

AiFi has plenty of competition in the effort to eliminate checkout lines. During one four-week stretch beginning in August, three different startups opened pilot cashierless stores in the San Francisco Bay Area.

One was Standard Cognition, whose inquiry started Mighty AI's shift to working with retail technology companies.

"This technology was coming regardless" of Amazon's moves, says Standard Cognition co-founder Michael Suswal. "However, Amazon gave the space validity and forced competitors to look for a way to compete." Investors, he says, have also taken interest.

Venture capital firms backed U.S. companies working on store automation with $111 million in 2018, a record in Pitchbook data going back to 2003. About half of that sum went to Standard Cognition.

The technology behind such pilots is largely unproven. AiFi last year said it would unveil a pilot project at a full-sized grocery store belonging to an unnamed retailer before the end of 2018. But the calendar flipped to 2019 without any such launch. A spokeswoman says the system wasn't ready and that confidentiality agreements prevent the company from discussing the matter further.

Amazon's own well-funded research and development operation missed its announced deadline for opening the first Go store to the public in Seattle. The company spent more than a year tinkering with the technology during an employee trial.

"Whether or not these pilots turn into full-scale rollouts in the near-term is unclear," Scott Jacobson, a managing director with Madrona Venture Group in Seattle, says of Go's imitators. "Too soon to say."

Others are taking a different approach, aiming to offer customers a bit of high-tech convenience without the expense of shutting down the store for a retrofit to install cameras and sensors.

Lindon Gao started experimenting with retail technology after getting frustrated with long lines in apparel stores on Black Friday. His first effort, in 2016, let shoppers use a code on their smartphones to remove anti-theft tags on clothing and simultaneously pay for the item so they didn't have to see a cashier. Retailers balked at the idea since it required a big investment of time and money tagging inventory with new devices.

He shifted his attention to supermarkets, combing grocery stores in New York to ask owners and managers what they wanted in a new system. The prevailing answer was something simple they could use in existing stores without spending a lot of money to knock holes in walls, run wires and install expensive devices.

So he reinvented the shopping cart by adding a scanner and payment system. The cart built by Caper, the startup he co-founded, looks like a shopping cart with a laptop and credit card reader mounted to it. 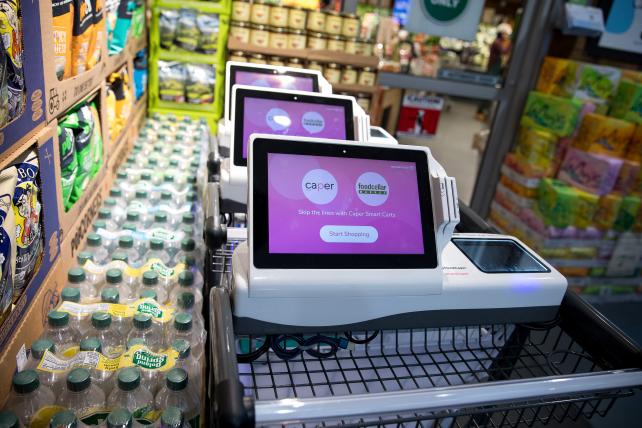 Shoppers scan barcodes as they fill their carts, which also has a scale for produce and other items sold by weight. The cart gets smarter with use, Gao says, thanks to cameras that shoot pictures after each item is scanned. The plan is that ultimately it will recognize items placed in the cart without scanning. He's been showcasing the cart at trade shows, and says he's received interest from grocers looking to bring their stores into the digital age."The Amazon Go rollout and the Whole Foods acquisition made people think they really have to innovate and if they don't innovate they'll get left behind," Gao says.Foodcellar, an all-natural grocer in Queens, has been using Caper smartcarts for about a year at its Long Island City store. Customers love the technology and some even take selfies with them, according to store co-founder Metin Mangut.

The carts appealed to him since he didn't have to install cameras and sensors. If one breaks, he can just get a new cart. The screens direct shoppers to products they want and flash alerts when they are close to items on sale, which helps encourage customers to spend more. He's still negotiating the price since he was in a trial, but said the carts are worth it to eliminate lines and free up cashiers to help shoppers.

"A frictionless experience is part of the future," he says. "It will be a hybrid. Some people like the interaction. Some people don't want to deal with anyone and just get what they want and leave." 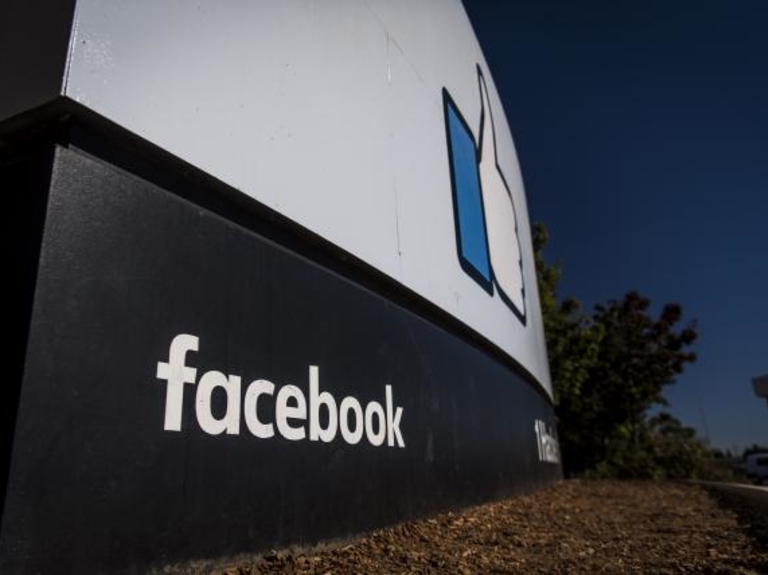