How to Make a Perfume Ad Go Viral: Just Be Lady Gaga

Lady Gaga has never shied away from attention. This is a woman, you won't need reminding, who wears dresses made of meat. And now the singer has made sure that her first perfume -- named, um, Fame -- is already plenty famous when it goes on sale today. 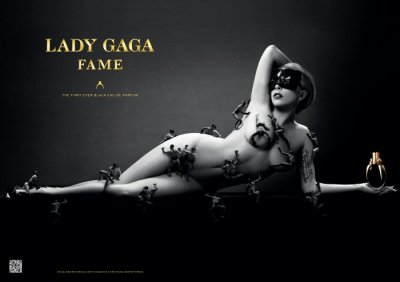 That's largely the work of a video promoting fame that garnered nearly a million views last week and spawned at least 20 copies and derivatives, according to Visible Measures.

The 34-second video, produced by Ridley Scott and directed by photographer Steven Klein, features Mother Monster (as fans call her) alternating between latex ensembles and then nothing at all while caressing muscled men wearing attire that seems inspired by the world of S&M. The video echoes the print ad that was released last month and features a nude Gaga covered in tiny, strategically placed men.

"We thought, let's just make the most epic fragrance campaign of all time, and let's not care at all about whether they can even print it or show it on TV," she told Vogue, which put her on the cover of its September issue.

Gaga, a master of publicity, actually started creating buzz for the fragrance over a year ago when she appeared on Australia's "The Kyle and Jackie O Show," where she said Fame would be made of "blood and semen" and smell "like an expensive hooker."

"You just get sort of the 'after' feeling of sex from the semen and the blood is sort of primal," she said. "And the blood was taken from my own blood sample, so it's like a sense of having me on your skin."

The pop star, who was ranked No. 1 spot in Press on Forbes' Celebrity 100 list in May (and No. 5 overall), stoked the publicity in June when she broke her own embargo and posted photos of the packaging on Twitter. According to that photo, the fragrance actually smells like "tears of belladonna, crushed heart of tiger orchidea with a black veil of incense, pulverized apricot and the combinative essences of saffron and honey drops."

The black perfume was concocted in Haus Laboratories in Paris and uses the latest "black water technology" so that it sprays on clear. Gaga described the look of it in Vogue as enticing and terrifying, like fame.

Lady Gaga, of course, is no stranger to the Viral Chart. She was a part of Google's "The Web is What You Make of It" campaign, which was on the Chart 17 times. The campaign featured a number of stars, like Justin Bieber, but Gaga's video was the most-watched of the campaign with 10.3 million views.

~ ~ ~
CORRECTION: An earlier version of this chart erroneously excluded Vovlo's "Ballerina" stunt. The chart has been updated to reflect the performance of Volvo's video.