Tuning In: Actor's Rehab Can Affect Ad Dollars -- Schedule Too
READ THIS NEXT
How restaurant chains are duking it out to be the best in their categories

Dulled Sheen: There's no two-and-a-half ways about it -- CBS's "Two and a Half Men" is one of the funniest and most popular programs on broadcast television. But there's nothing humorous about the hiatus the show has been forced into while star Charlie Sheen makes another attempt at rehab. 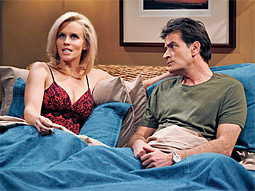 'Two and a Half Men'
Credit:
CBS

With 30 seconds of commercial time costing an average of $206,722, according to Ad Age's annual survey of ad costs on prime-time broadcast TV, "Two and a Half Men" is CBS's most expensive program for marketers. Chances are, the show's sponsors would prefer the usual number of original episodes to run as originally scheduled rather than repeats filling a rehab-induced break. After all, it's what they're paying for.

CBS can put this hot-button issue on the back-burner quite easily. Yes, the network has two more originals it can show (they're slated to run in the first half of February), and repeats of "Two and a Half Men" are nothing to sneeze at (that's why you see them running constantly these days on FX and in syndication). What's more, Mr. Sheen's deal to appear in "Two and a Half Men" lasts for this season and next. Chances are, he's coming back. He returned last year when a similar incident occurred, and CBS and the program suffered little fallout.

But "Two and a Half Men" is an integral piece of the CBS lineup. Its popularity has helped the Tiffany Network launch new shows -- think "Mike & Molly" and "Hawaii Five-0" -- with the audience lead-in it provides earlier on Monday night. Without "Two and a Half Men" in its stable, CBS might not have been so bold as to put two comedies in the 8 p.m. hour on Thursdays, challenging NBC's longstanding efforts on that evening (and, perhaps, prompting NBC to start running some of its comedies at 10 p.m. Thursday nights?) The show's absence doesn't just hurt its own performance; it affects that of others.

And at some point, these disruptions to show production have to cause more than just regret that a popular actor has behavior issues. Over time, Mr. Sheen's troubles could force a reduction in the number of episodes shot per season for "Two and a Half Men" -- that may help CBS keep costs down, as it pays for fewer episodes, which helps to offset any ad-revenue losses. But that sure wouldn't help Warner Bros., the program's producer, which wants as many episodes as possible to sell into syndication.

Whether or not CBS finally has a real "Men" problem remains to be seen. Yet when the star of your most attractive show prompts shutdowns of production so late in a program's tenure, you have to wonder if CBS and Warner Bros. aren't starting to see a series finale sometime in the not-too-distant future.