8 memorable brands that bit the dust this decade, plus one on life support | Ad Age
Skip to main content

8 memorable brands that bit the dust this decade, plus one on life support 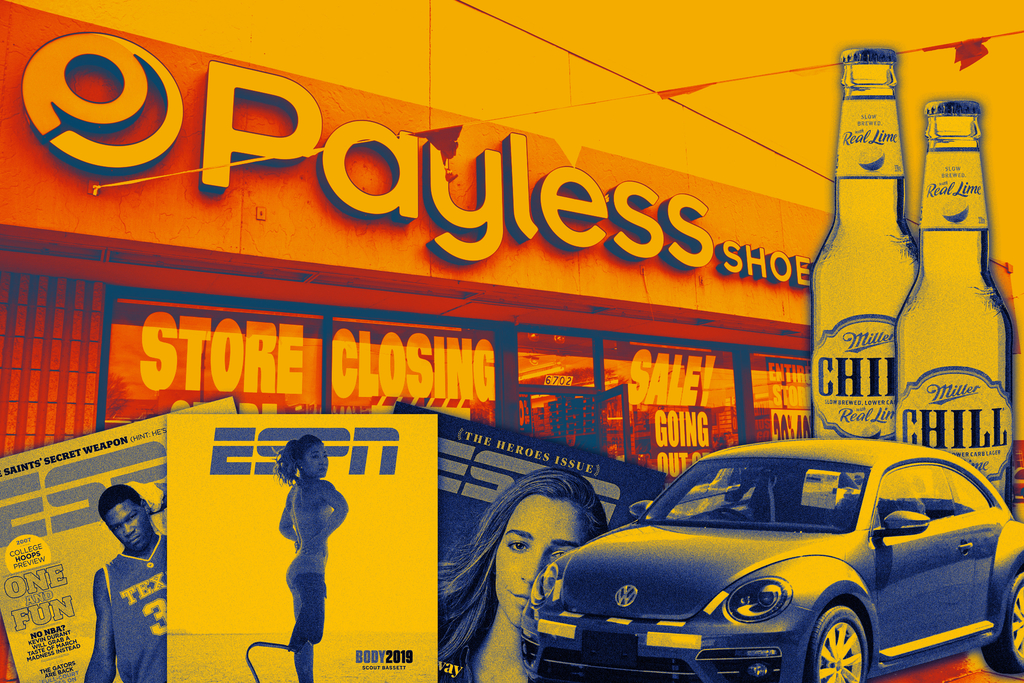 The last decade was good to startups, with dozens of new brands bursting on the scene in a big way, from Dollar Shave Club to Uber. But we also said goodbye to one-time heavyweights like Borders, Payless and VW’s Beetle. Below, we reminisce.

It no longer “feels good to pay less.” The short-lived slogan, unveiled in 2017, was not enough to save the discount footwear retailer, which announced in early 2019 that it was closing all 2,100 stores in the U.S. and Puerto Rico. If you want cheap shoes, you have a longer way to walk: Payless still operates 750 brick-and-mortar stores in Central America, the Caribbean, South America as well as in parts of Asia, Middle East and North Africa, according to its website. Oh, and you can still buy its shoes on a little website called Amazon.

Borders
One of Amazon’s countless victims, the book retailer wrote its final chapter in 2011 when it announced plans to liquidate after last-ditch attempts at survival failed. For the complete history, check out the Ann Arbor News. It all began for Borders in the Michigan city back in 1971. We’ll keep our version of the story short: Barnes & Noble won, Borders lost.

Even a millionaire could not save the chain, known for using drums and sirens to celebrate kid’s birthdays. Founded in Portland in 1963, Farrell’s slowly died off in recent years. As documented by the Orange County Register, Marcus Lemonis, host of CNBC’s reality business show “The Profit,” bought one of the locations in Buena Park, California to try to save it, but it closed in December, 2018. Another ownership group controlled one in Brea, California, but the location—the last one—shuttered over the summer.

Lemonis still owns the brand name and concept, according to the O.C. Register: “I’ll hold onto it until I find another opportunity, even a smaller concept like a quick serve, and trademark it,” he told the newspaper. “I’ll put it on the shelf and wait for the right window.”

But for now, all we have is this vintage ad:

Bounty is still around and so is Dawn, of course. But Bounty with Dawn—which debuted in 2015 promising an “ultra-durable Bounty paper towel with the grease-fighting power of Dawn dish soap”—went to the big pantry in the sky in 2019, after Procter & Gamble’s big bet on cross-pollinating brands did not pay off, at least in this case.

With all of today’s brouhaha about hard seltzers, it’s easy to forget that a brand battle once raged for lime-flavored beer: Miller Chill versus Bud Light Lime. Bud Light’s line extension is still around, but Miller Chill—which boasted a "hint of lime" and "pinch of salt" when launched in 2007—was discontinued seven years later.

Born in Nazi Germany in the 1930s as the “people’s car,” the Beetle died in Mexico in July, when the last one rolled off the assembly line. In the U.S., the Beetle has come back from the dead once before—it was discontinued in 1979 but resurrected in 1998 with a new design featuring a built-in flower vase. But with small car sales anything but rosy today as buyers move to SUVs, the odds are slim that the Beetle comes crawling back anytime soon. The Beetle did make it into Disney Plus, however, where fans can recapture the car’s glory by watching “The Love Bug,” the 1968 flick in which the Beetle starred as Herbie.

While less iconic than the Beetle, Ford’s Focus was once a hit. It debuted in North America in 1999, using what the automaker at the time called a  “mass customization” approach, in which buyers could choose from a range of options, like a “pet package” that came with a leash and water dish. But the car could not survive Ford’s recent sedan purge. The last one rolled off the assembly line in 2018.

It was a rough decade for magazine brands with dozens of titles folding or going digital-only. Of course, the previous decade wasn't too kind to print, either. In 2009, Ad Age ran a series called “The Last Page” that documented the demise of more than 20 titles that ceased print publication in that year alone, including Teen, PC Magazine, Playgirl and CosmoGirl. In recent months magazines that ceased printing include The Weekly Standard, Family Circle and Glamour. Some of the brands are not technically dead because they have online versions. PCmag.com is still fairly robust, but the coverage is not exactly about PCs anymore; recently a story headlined “Can Smell-O-Vision Save VR?” led the site. As for ESPN the Magazine, it announced this year it was ending its print run after a 21-year run. Trivia question: Who was on the first cover?

Lastly, we give a nod to the nearly dead...

If Amazon killed Borders, Netflix took down Blockbuster. The reasons are obvious, so we won’t get into it here, except to say that there is one store left—in Bend, Oregon. It’s gotten so much press that all the attention might give it a fighting chance at survival.