SHANGHAI (AdAgeChina.com) -- Pernod Ricard's Absolut Vodka division is well-known in the West for the iconic shape of its bottle as well as the striking design graphics that appear on limited edition bottles and in ad campaigns. 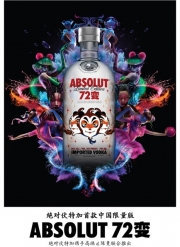 Now the Swedish-based vodka brand is bringing that heritage to China. It is releasing its first limited edition bottle for that market, Absolut 72 Bian, featuring the work of young Chinese artist Gao Yu. Absolut will release 350,000 of the limited edition bottles, which are only available in China.

Mr. Gao's design was inspired by an ancient Chinese fable, "Journey to the West," a heroic story about the monkey king Sun Wukong, who acquires the power to undergo 72 transformations (or 72 bian). Using his fearlessness and creativity, he is able to overcome all obstacles.