HBO shows rule 'Because of Her' in campaign spotlighting female creators

As the entertainment world has been plagued by #MeToo controversies, brands are stepping up to assert the talents and influence of Hollywood's female creators. Netflix, for example continues its "She Rules" push, and Samsung put top women creators at the center of its Oscars campaign. Now, HBO steps up with an effort showcasing the women who are making big things happen on the network's most popular shows.

The brand's "Because of Her" campaign pulls key scenes from various series and, in different ways, lifts the veil on the female talents driving them. One spot, for example, features a moment from "Ballers" in which Dwayne Johnson's character Spencer Strasmore tells off another from a jail cell--yet it's a woman's voice doing the chiding. The camera pulls out to reveal Chloe Domont, one of the show's directors, calling the shots from the edit suite.

Another spot highlighting "Insecure" steps out of a conversation Issa Rae is having with her friend Molly (Yvonne Orji) as she considers what kind of "fuck" she just had with an ex. As she pauses to reflect, the film cuts to the show's writer and producer, Amy Aniobi at her computer, deciding where the dialogue should go next. The campaign debuted last month with an ad featuring writer Deb Cahn, explaining why she's so skilled at writing male voices--in this case, for the HBO show "Paterno."

As reported in the Hollywood Reporter, during the 2014 to 2015 TV season, the DGA found that only 23 percent of HBO's directors were not white men. But since then, that number has more than doubled and now 57 percent of its directors are women and men of color and white women. Having recently broken this milestone, "it is important that those voice also be seen," says Jason Mulderig, VP of brand and product marketing at HBO. "'Because of Her' does that."

When asked if "MeToo" has anything to do with the timing of the campaign, Mulderig says that the movement "has had a profound impact on the industry and HBO."

The spots are running on HBO, HBO Go, HBO Now and across the network's social channels. The campaign, created out of David and Goliath, will be highlighting more talents in the coming weeks. One focusing on "Big Little Lies" celebrates Executive Producer Bruna Papandrea, and another for "Barry" shows DP Paula Huidobro at work behind the camera.

For now, the effort highlights "key" roles like directors, EPs, writers and DPs, but "we are not limiting ourselves to those positions as we continue the campaign," Mulderig says. "We are in conversations with other talent to create more." 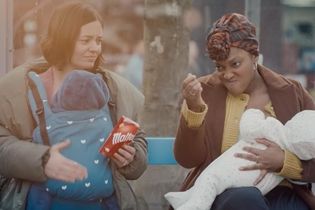