For our AAPI Creative Excellence series, the R/GA creative director looks back on campaign that put women behind the camera front and center

In this installment of our Asian American Pacific Islander Creative Excellence series for AAPI Heritage Month, we have a moving story from R/GA Creative Director Bernice Chao. A second-generation Chinese Taiwanese American, Chao has created for major brands across an array of industries, including Google, Airbnb, Frito-Lay, HBO, Nissan, The Voice and Sony Playstation. She's also the co-founder of Asians in Advertising, an organization dedicated to supporting the careers of AAPI industry talents.

Outside of the agency world, she leads a busy life as author, speaker, professor at L.A.’s Loyal Marymount University and General Assembly and lead organizer of TEDXCulverCity. As if that weren’t enough to fill her plate, Chao can officially check Ironman competition off her bucketlist. She’s also mom to a two-year-old toddler and three-week-old baby.

Our guest editor David Angelo, CEO and Founder of David&Goliath, says “it’s been an absolute honor working with Bernice, not only on advertising campaigns but also projects of the heart. From her volunteer work with TEDxCulver City to the Light Bringer Project for underserved youth, her own passion to make a difference shines through. And, her tireless and dedicated creative vision and work on ‘Today, I’m Brave’ helped to elevate our nonprofit to another level. I’m forever thankful.”

Here, Chao recalls an important project from her David&Goliath days for HBO. The “Because of Her” campaign was an inventive push that began with scenes from popular shows, but then ended with a major reveal: the women responsible for creating those hits. 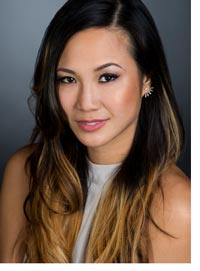 To say I was excited for a brief to help HBO celebrate Women’s History Month would be an understatement. At a time when the film industry was getting flagged for the #MeToo movement and the reported diversity numbers were staggering, this was an opportunity to show representation.

When it comes to HBO, many people are aware of the women who star in front of the camera, but what they may not know is that there are amazing women in crucial roles behind the camera. From directors to writers to cinematographers and producers, women are a fundamental part of the quality programming that we all know and love.

The campaign cleverly retooled scenes from shows like "Ballers" and "Insecure" to surprise the viewer, shifting focus from the talent featured to reveal the female talent working for the network behind the scenes.

This piece was especially important to me and my career because, as a creative in a heavily white male-dominated role, I saw little representation of women in creative leadership positions, and even rarer was a female person of color. When I started volunteering to speak at at-risk high schools, I noticed that the students who stayed to talk to me were predominantly women and many of them expressed that they didn’t see themselves in a creative position until they listened to me speak.

This has inspired me to continue to get my visibility out there by mentoring, as well as teaching at Loyola Marymount University and General Assembly. During the pandemic I’ve offered a portion of my personal website as a resource source for young creatives and the opportunity to grab virtual coffee with me. Most recently I co-founded the organization “Asians in Advertising,” a free community providing resources and networking opportunities. We have two upcoming events: Mentorship Matchmaking and a 3 Part Leadership Series.

Moving forward I want to continue creating more opportunities for others to find representation and community, because “seeing is truly believing.”