BMW Films Returns With 'The Escape'

Today, BMW announced the return of BMW Films with "The Escape," a new addition to the series, as part of the celebrated campaign's 15th anniversary.

The film will debut on Sunday, October 23 at 6 p.m. EST at BMWFilms.com, which currently features this sneak peek. Clive Owen will return to play "The Driver," alongside other celebrity talents, Dakota Fanning ("War of the Worlds," "I am Sam"), John Bernthal of "Walking Dead" and "The Punisher" and Vera Farmiga ("The Departed," "Up in the Air"). Director Neill Blomkamp ("District 9," "Elysium") will be behind the camera this time around, joining a campaign roster that includes big screen directors such as Alejandro G. Inarritu, Ang Lee, Guy Ritchie, Joe Carnahan John Frankenheimer, John Woo and the late Tony Scott.

To create the film, BMW assembled some of the original creators of the campaign, which originated out of Fallon, Minneapolis: Creative Director Bruce Bildsten, Executive Producer Brian DiLorenzo and Creative Consultant David Carter, who co-wrote the new film with Mr. Blomkamp. Anonymous Content's Eric Stern and Steve Golin, who were producers on the original round, also returned to produce the new film.

The campaign is an advertising icon, having won the Cannes Lions International Festival of Creativity's first ever Titanium Lion. It was also named to Advertising Age's list of "Top Campaigns of the 21st Century," hailed by one judge as "the first big media event of 21st century marketing."

Ad Age had reported that BMW would be revisiting the campaign back in 2014, when Trudy Hardy, BMW's VP of marketing, said at the Automotive News World Congress in Detroit that the brand was planning to revive the campaign. The automaker, however, declined to comment further at the time.

A BMW spokesperson told Ad Age and Creativity today, "This is something we've wanted to do, and have looked at doing, for a long time. We're fortunate that the stars have aligned now, on the 15th anniversary of the original series, allowing us to produce a worthy successor to the original series." 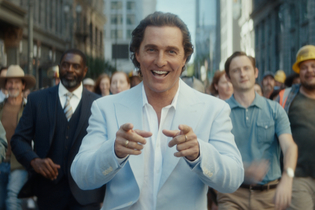